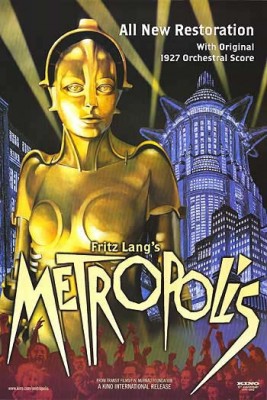 From 1927 until the early 1980s, Metropolis was screened in a variety of versions and lengths, all of them derived from the general release prints cut by Paramount and UFA. In July 2008, it was announced that an essentially complete copy had been found â€” a 16mm dupe negative unearthed by the curator of the Buenos Aires Museo del Cine that was considerably longer than any existing print. It included not merely a few additional snippets, but 25 minutes of â€œlostâ€ footage, about a fifth of the film, that had not been seen since its Berlin debut. The discovery of such a significant amount of material called for yet another restoration, spearheaded again by the Murnau Foundation and coordinated by their Film Restorer Anke Wilkening.
In Metropolis, a towering city of the future, society is divided into two classes: one of planners and management, who live high above the Earth in skyscrapers; and one of workers, who live and toil underground, slaves to the whistle of Metropolisâ€™s ten-hour clock. Freder Fredersen, the only son of Metropolisâ€™ ruler, lives a life of luxury. One day, he follows a beautiful girl down to the grim Lower City. . .
“The cumulative result is a version of “Metropolis” whose tone and focus have been changed. “It’s no longer a science-fiction film,” said Martin Koerber, a German film archivist and historian who supervised the latest restoration and the earlier one in 2001. “The balance of the story has been given back. It’s now a film that encompasses many genres, an epic about conflicts that are ages old.”-New York Times
For tickets click HERE