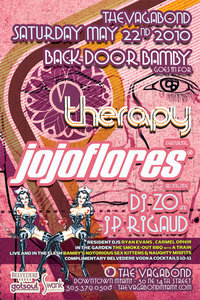 *Therapy is an underground music that goes beyond providing a remedy: itâ€™s a cure. Luscious and profound, Therapy offers refuge, unity and pride. Since 1999, Therapy has been the purveyor of soulful music through garage, deep house and afro-latin rhythms. Gotsoulâ€™s Therapy sessions has been voted â€œBest Eventâ€ by Now Magazine in Toronto and â€œBest Partyâ€ by The Montreal Mirror. New York City, Miami ,Toronto, Dubai, San Francisco, Manila, Melbourne, Singapore, and Cape Town to name a few have all played host to this little party that could. Montrealâ€™s award-winning soiree travels the world with jojoflores â€“ voted â€œBest International DJâ€ by NYCâ€™s Undaground Archives Choice Awards, and has hosted the likes of Osunlade, Dennis Ferrer, Jazzy Jeff,Tortured Soul and Louie Vega.
Longevity, integrity and credibility; youâ€™ve got to feel it to believe it!

â–€ JP RIGAUD
With almost two decades of experience on the turntables, it has been in the last twelve years that JP Rigaud has gained worldwide recognition. Unsatisfied with the musical growth in Miami Beach during the early 90s he decided to take matters into his own hands. He opened Zanzibar, one of the first venues on the beach to host the worldâ€™s top drum & bass DJs. There J.P. created the first successful weekly drum and bass night in Miami Beach and a pulsing underground music scene. Always on the up and coming with electronic music, he found a way to introduce different genres of sounds to a once wasteland of musical taste through his venue. Whether spinning or hosting new acts, J.P. always found a way to keep the music original, alive & flowing. His creativity, love and enthusiasm for new music have contributed to the evolution of electronic music on the South Beach scene. This passion leads him around the globe and while djing in Europe he saw the emerging popularity of downbeat
and the lounge trend. J.P. brought these sounds and vibe back to South Beach and this time introducing it to such venues as Bash, Nikki Beach Club and People Lounge. J.P. Rigaud became the resident DJ of Nikki Beach Club, the infamous venue, known as the first European style beach club in the U.S. There he found his niche for almost three years and perfected his new sound for the masses. Once again turning the Miami party scene on its ear through his avant-garde sound. JP is credited with bridging the lounge trend to Miami and as a result Nikki Beach success. In an eight-hour marathon of emotions, J.P. took his audience on a journey from chill -out, new jazz, broken beat to the sounds of deep, bossa, latin house and house. Among his travels, J.P. will again tour the U.S , Europe and South America. So look out for his set alongside DJ ZO and jojoflores at The Vagabond on May 22nd…

â–€ JOJOFLORES
jojoflores: Music | Dedication | Passion Jojoflores has come a long way from his humble Montreal roots. Today, House Musicâ€™s â€œMixed Tape Kingâ€ has achieved global reach, and is now a tireless Ambassador of soulful dance music to every corner of the world. In addition to being one of the genreâ€™s most respected Djâ€™s; jojoflores is also CEO of Gotsoul Records and founder of the infamous Therapy soirees â€“ now enjoyed in 7 cities worldwide from Cape Town to San Francisco and Toronto. Along the way, heâ€™s found time to open up a club, own a record shop, and produce numerous records and CDâ€™s.

Jojofloresâ€™ reputation for rocking a dance floor has rewarded him with multiple residencies at famed clubs world wide, including New York Cityâ€™s Cielo; Nikki Beach Miami; Deep in Los Angeles; Lotus in Hawaii; along with venues/events in Melbourne, Dubai, Brazil, Santorini & Athens. He was voted “Best International DJ” 4 years running by NYC’s Undaground Archives. His dedication and hard work have also garnered him a corporate client list, which includes MAC Cosmetics, Apple, Hugo Boss, Vanity Fair, Puma, Details Magazine, Banana Republic, Cadillac, and The Delano Hotel. He has headlined events with Wyclef Jean, Jody Watley, K-OS, Jazzy Jeff and not to mention heâ€™s become Dsquaredâ€™s go-to DJ in Canada. Jojofloresâ€™ skilled packaging of music & events coupled with his trademark passion, have driven him to stay current. He and Gotsoul have skillfully navigated the digital age and theyâ€™re now making an aggressive foray into cyberspace. In September â€™09, he launched h
is very own jojoflores iPhone app. Also, in an effort to advance the cause of Djs, Artists & the industry in general, he was instrumental in the creation of electronic music portal www.UnderOneHouse.com

â€œWe wanted to create a site that artists and fans of our music can connect and share also conduct business. I want to help myself and other Artists enhance and lengthen careers outside of traditional gigging.â€

Over the last 25 years jojoflores has worked his way up from 15 year-old resident to jet-setting icon. Through it all, he has remained steadfastly passionate about both his music and profession. With his transition into the new age of technology, jojoflores has signaled that he plans to remain relevant and aggressive while still â€œrocking the dance floorâ€ for audiences the world over.