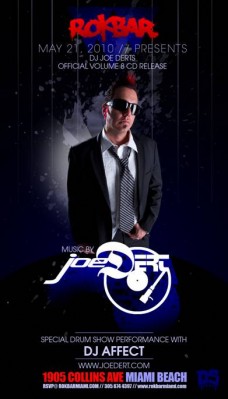 Joe Eshkenazi, famously known as DJ Joe Dert, once said that it was during his residency Rokbar that he knew he was meant to inject energy into a room and keep people on their feet until 5 a.m. So when considering locations for his latest cd release, it was only natural that the renowned drummer, producer and international DJ would launch his newest project – Volume 8 – at the swank lounge where his experiences became the catalyst for his success at the turntables.

On the heels of celebrating their six-year-old anniversary, the notorious rock â€˜nâ€™ roll boutique nightclub will set the stage for Dertâ€™s return and looks forward to celebrating the night with Miamiâ€™s nocturnal hipsters.

Eshkenzi has had the privilege to work with renowned talents in the rock and electronic industries including Ozzy Ozbourne, DJ AM, Marilyn Manson, Linkin Park, DJ Vice, Korn, Rob Zombie, Creed, Disturbed, Puddle of Mudd, Pete Tong, Evanescence, Cedric Gervais and many more. Having mastered the art of entertaining and bringing cutting-edge style to sophisticated locations, Eshkenazi has gained the reputation as a diversified artist with the ability to adapt to his surroundings and really permeate life into an event.