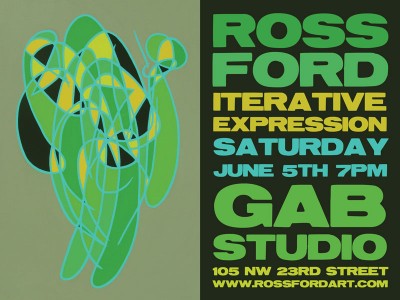 Ross Ford outlines his creative philosophy, Iterative Expression, a continuing exploration of emotion through a consistent process. The shape of chaos can be defined by consistent measurement. When Ford started showing his expressive iterations on Lincoln Road in 2006, they were recognizable faces, since then they have mutated into something else, become more abstract, complex and less recognizable. That progression is what Iterative Expression is all about: a constant metamorphosis of line and color that defines an internal subconscious space. Each painting is an evolution of the last. Whereas repetition aims to produce identical copies, the goal of iteration is produce unique variations. Since 2006 he has produced nearly 400 large paintings, each different, each evolved from the last. This progression will be on display at GAB Studio on June 5th. The paintings will be hung in chronological order so that the evolution can be experienced. In addition to the paintings, drawing
s and pages from his sketchbook illuminating the creative process will also be on display. This exhibit represents the last 4 years of work in Miami, beginning with paintings that he originally sold on the street to his most recent studio work.
Since 2006 Ford has been showing his work in various locations around Miami. Starting on the street, he graduated to nightclubs and alternative spaces, then to Butter Gallery in 2007. Ford and Butter parted ways when the original Butter in Coconut Grove closed in December 2008. Since then he has been working out of his studio at the Bakehouse Art Complex and participating in various shows at spaces like Artlab33, GAB Studio and the Overthrow booth at Aqua Art Fair in Wynwood.

For more information please visit www.rossfordart.com
There will be beer and a special musical performance by Artofficial. www.artofficialmusic.net