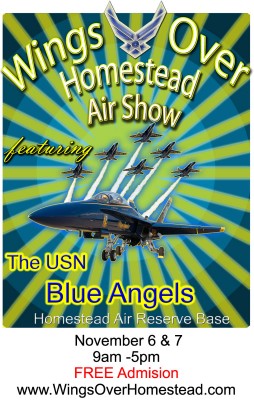 Jaw-dropping precision aerobatics will be highlighted against a backdrop of jet sound as the U.S. Navy’s Blue Angels headline an all-star list of performers at the Homestead Air Reserve Base “Wings Over Homestead” air show Nov. 6-7, 2010. This is a FREE event and open to the public!

The 482nd Fighter Wing, which maintains and operates Homestead Air Reserve Base, FL, is a combat-ready Air Force Reserve unit located 25 miles south of Miami. The wing consists of approximately 1,800 military and civilian members who reside here in South Florida.

Blue Angels – A Blue Angels flight demonstration exhibits choreographed refinements of skills possessed by all naval aviators. It includes the graceful aerobatic maneuvers of the four-plane Diamond Formation, in concert with the fast-paced, high-performance maneuvers of its two Solo Pilots. Finally, the team illustrates the pinnacle of precision flying, performing maneuvers locked as a unit in the renowned, six-jet Delta Formation…