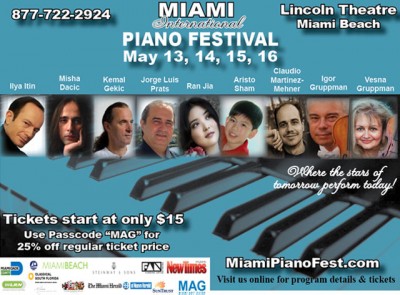 The Miami International Piano Festival is celebrating its 13th Season in 2010. The May Discovery Series is held at the intimate Lincoln Theater (home of the New World Symphony) on Miami Beach. The Series opens with a sure crowd-pleaser that features works by two composers who are both celebrating 200 year anniversaries in 2010: Chopin and Schumann. To pay tribute to these prolific composers of the Romantic period, the Festival will present four fantastic pianists in one evening.
Kemal Gekic and Misha Dacic both hail from former-Yugoslavia and for this program Gekic will perform provocative Chopin selections (including Scherzo Op. 20 and Polonaise Op. 53) and Dacic tackles Schumann’s tour de force, “Humoresque.” Russian pianist Ilya Itin will offer his refined interpretation of several works by Chopin such as Fantaise in F minor and Waltz Op. 34 and Cuban legend, Jorge Luis Prats presents Schumann’s delightfully varied “Symphonic Etudes.” With so much talent and exquisite repertoire sharing the stage on one evening, this concert will likely run a bit longer than most.
On Friday, May 14th, the Festival is pleased to present the South Florida concert debut of Ran Jia (China). At twenty, Ms. Jia is already regarded as a striking musician with unusual natural abilities. Tan Dun hailed her a “piano poet with dramatic skill in music making.” Her program will feature four Sonatas by Scarlatti, Shubert’s Sonata in A minor Op. 42 and Le Tombeau de Couperin by Ravel.
The popular “Prodigies and Masters of Tomorrow” matinee concert on Saturday, May 15th will see the return of the astounding Aristo Sham (Hong Kong), now 14 years old. One could almost hear the jaws dropping at Aristo’s South Florida debut at the Festival last May. His current program will feature works by Scarlatti, Beethoven, Mendelssohn, Barber and Albeniz. Families with children are encouraged to attend this concert which seeks to inspire the next generation of classical music lovers.
On Saturday evening, Spanish pianist, Claudio Martinez-Mehner will make his Florida debut. Winner of numerous prizes, Mehner recently resumed his career as a solo artist and has a respected reputation as a teacher and chamber musician. His Festival program will include Beethoven Sonata Op. 109, Schumann’s Sonata Op/ 14 “Concerto without Orchestra” as well as works by Janacek and Debussy.
This year’s grand finale and closing night “Chamber Music Extravaganza” will welcome Igor Gruppman back to South Florida. Many remember Mr. Gruppman as the Concert Master of the Florida Philharmonic and at present, he is artistic director of the Concerto Rotterdam chamber orchestra and concertmaster of the Rotterdam Philharmonic. He will be joined by his wife, violinist/violist, Vesna Gruppman who teaches at the Rotterdam Conservatory in the Netherlands. Joining the Gruppmans will be pianists Ilya Itin (Russia) and Jorge Luis Prats (Cuba) as well as a special guest cellist. The program will include Schumann’s Fantasy Pieces Op. 73 and a special String Quintet transcription of Chopin’s Piano Concerto No. 2. Rounding out the program will be selections by Brahms including the Piano Quartet in G minor Op. 25.
All concerts start at 8:00 p.m. except for the Saturday Matinee “Prodigies” program which begins at 2:00 p.m. A series of pre-concert Lectures and Master Classes are planned as part of the 2010 Miami International Piano Festival. The following programs are FREE and open to the public:
Friday, May 14th, 2010. 7:00 p.m. PANEL DISCUSSION: Artists and their representatives engage in a lively discussion about the challenges facing artists today, what steps are required for their continued success, how to avoid failing and also why so many have lost the drive, faith and motivation to continue concertizing.
Saturday, May 15th, 2010. 7:00 p.m. LECTURE: Frank Cooper, Research Professor of Music from the University of Miami What makes a musical personality? There are traits which distinguish musicians from the average woman or man, and traits which distinguish one musician from another. This lecture explores the characteristics that set composers and performers apart from all others, allowing for great esthetic achievements and for all too human failures.
Sunday, May 16th, 2010 7:00 p.m. FILM: “The World’s Greatest Musical Prodigies.” A three-part documentary produced by Britain’s Channel 4 Television, which is currently being distributed by American Public Television. Episode 1: Alex Prior travels to Miami at the invitation of renowned prodigy-hunter Giselle Brodsky, who runs the Miami International Piano Festival. Giselle has selected five of America’s most gifted young musicians, who have flown in from all corners of the States to audition for Alex.
Miami International Piano Festival
Lincoln Theatre
541 Lincoln Road
Miami Beach, FL 33139
Ph: 305.935.5115
www.miamipianofest.com
For more information about local openings and events, please visit www.miamiartguide.com