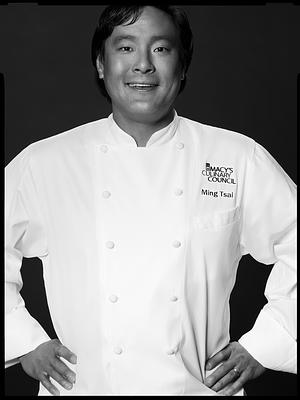 Ming Tsai started cooking at his familyâ€™s Chinese restaurant as a teenager in Dayton, Ohio. He then pursued a mechanical engineering degree from Yale University, which proved to be a brief detour in a career that would lead him to Paris, where he Studied at Le Cordon Bleu. Soon afterwards, he began working at Fauchon and Natacha where he encountered east-west cuisine for the first time. Back in the United States, Ming earned his masterâ€™s degree in Hotel and Hospitality Administration and Marketing which led him to the Mandarin Oriental Hotel in San Francisco.

Fast forward to 1998, Ming returned to the Boston area and opened his three-star restaurant Blue Ginger. Shortly after opening, the restaurant was nominated as â€œBest New Restaurant of the Year 1998â€ by the James Beard Foundation, as well as Esquire Magazine honored Ming as the â€œChef of the Year 1998.â€ Numerous accolades followed, including the James Beard award for the 2002 Best Chef Northeast and Second Most Popular Boston Restaurant by the Zagat Restaurant Guide for seven consecutive years.

Ming, an Emmy Award winner, currently hosts and is executive producer of the public television cooking show Simply Ming. Ming is the author of three cookbooks: Blue Ginger, Simply Ming, and Mingâ€™s Master Recipes. He is a national spokesperson for FAAN (Food Allergy and Anaphylaxis Network) and hosts a weekly podcast offering tips and tutorials on everything from filleting fish to decanting wine. Ming is also a founding member of Chefs for Humanity, a coalition of chefs and culinary professionals who organize relief and fundraising for people in need throughout the world. He is proud to have cooked for the police force and displaced victims of Hurricane Katrina.