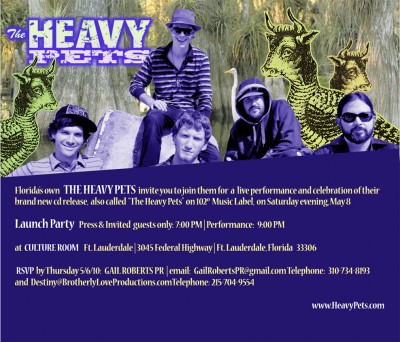 Florida’s own, The Heavy Pets (THP), are celebrating the release of their second full-length studio effort on Saturday, May 8 and we’d love for you to join us. The self-titled album features 12 colorful tracks, a slew of special guest musicians and a distinctly bold new statement from THP. CDs will be distributed at the launch party.

The Heavy Pets (THP) are an American band whose contagious vibe blends rhythm and blues, jazz-funk and reggae fusion with homegrown rock and roll. Called â€œa living, breathing, force of natureâ€ by Dan Sweeney of Relix magazine, THP are known for powerhouse performances spiked with hot electric licks and multi-climactic instrumental solos, as well as for their masterful acoustic acumen. In 2007, the group became an instant Sirius radio sensation with the release of their acclaimed double-disc debut album, Whale, driven by hit tracks â€œOperation of Flightâ€ and â€œSleep.â€ Major festival darlings, THP have taken the stage at Bonnaroo, moe.down, Langerado, New Orleans Backbeat Jazzfest, and their namesake PetZoo, a two-day, multi-band festival that draws hordes of Pets devotees to Bucks County, PA, to feast on the headlinersâ€™ live alchemy. www.theheavypets.com