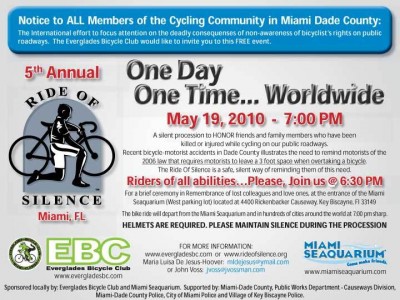 {The Soul Of Miami are bikers.}

“The Ride Of Silence is a free ride that asks its cyclists to ride no faster than 12 mph and remain silent during the ride. There is no brochure, no sponsors and no registration fees. The ride, which is held during Bike Safety month, aims to raise the awareness of motorists, police and city officials that cyclists have a legal right to the public roadways. The ride is also a chance to show respect for those who have been killed or injured.

Cyclists will meet and set up at the Miami Seaquarium and gather at the west parking lot, Miami-Dade Police will control the traffic light at Mast Academy Drive. Once the cyclists are cued up and ready to go, police will hold inbound vehicle traffic. Cyclists will enter the roadway and travel on the inside vehicle travel lane, once the last cyclist in out, police will release vehicle traffic to travel on the outside lane. Vehicle traffic exiting the Village (outbound) will be routed onto the outside vehicle travel lane. Cyclists will continue their ride on inside inbound travel lane turning at the Crandon Park maintenance/firehouse circle, traveling westerly (outbound towards the mainland) in the center inside lane to the Mast Academy traffic light. At this point cyclists will turn and complete a send loop, returning to the point of origin. The ride will take place with the Miami-Dade County Police providing an escort type procession in marked squad cars. City of Miami, and Village of Key Biscayne Police will also provide services for the event.

The bike ride will depart from the Miami Seaqurium, west parking lot, on the south side of the Causeway and travel in an easterly direction (towards the Village of Key Biscayne) in the center inside travel lane of the Causeway, to the firehouse turn around loop prior to entering the Village. At this location, the ride will turn back traveling westerly (towards the mainland) in the center inside lane to the Mast Academy Drive traffic light , completing two laps, then return to the origin point. The ride will take place with the Miami-Dade County Police providing an escort type procession in marked squad cars. City of Miami, and Village of Key Biscayne Police will also provide services for the event.”