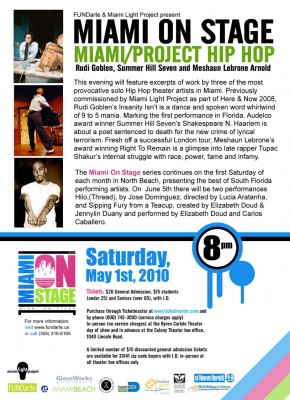 This evening will feature excerpts of work by three of the most provocative solo Hip Hop theater artists in Miami. Previously commissioned by Miami Light Project as part of Here & Now 2008, Rudi Goblenâ€™s Insanity Isnâ€™t is a dance and spoken word whirlwind of 9 to 5 mania. Marking the first performance in Florida, Audelco award winner Summer Hill Sevenâ€™s Shakespeare N. Haarlem is about a poet sentenced to death for the new crime of lyrical terrorism. Fresh off a successful London tour, Meshaun Lebroneâ€™s award winning Right To Remain is a glimpse into late rapper Tupac Shakurâ€™s internal struggle with race, power, fame and infamy.

5/1/2010 8:00 PM
Buy tickets now.
$20 General Admission, $15 students (under 25) and seniors (over 65), with I.D. Purchase through Ticketmaster at www.ticketmaster.com and by phone
(800) 745-3000 (service charges apply), or in-person (no service charges) at the Byron Carlyle day of show after 4PM and in advance at the Colony Theare box office, 1040 Lincoln Road, noon to 5PM.
A limited number of $15 discounted general admission tickets are available for 33141 zip code buyers with I.D. in-person at all theater box offices only