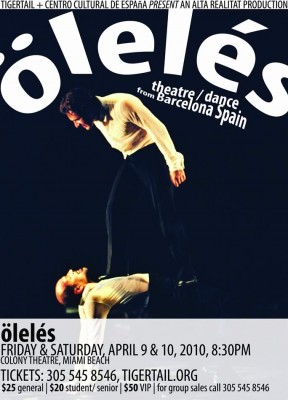 CortÃ©s has performed with DV8 Physical Theatre in London, among others and MuÃ±oz, who formed his own company in 1995 and is dubbed the AlmodÃ³var of dance in Spain. This simmering physical theatre work is guaranteed to draw the audience through an intense and furious male bonding.
FRIDAY & SATURDAY, April 9 & 10, 8:30PM
COLONY THEATRE, 1040 LINCOLN ROAD, MIAMI BEACH
(305) 545-8546 | tigertail.org | Tickets
$35 general admission | $50 VIP (priority entrance + seating)