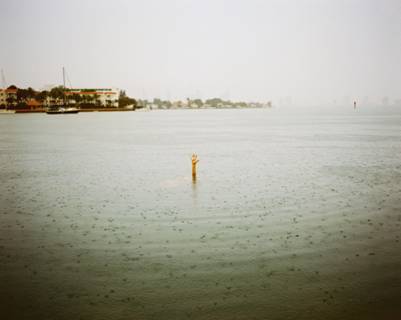 777 Studio Gallery in Coral Gables is pleased to announce the upcoming public exhibition of artwork by two Miami-based talents, Antonia Wright and Ruben Millares. The exhibition is centered on the exploration of the human experience in the built and natural worlds; our relationship to our surroundings and to each other. Wright will present a series of photographs, On the Other Hand, video, and installation and Millares will present a multisensory installation of mobile sculptures and ink drawings for the exhibition which premieres with an opening reception with the artists on Saturday, March 20th, 2010 from 7:00 p.m. to 10:00 p.m.

In the series On the Other Hand, Antonia Wright repeats the same neutral gesture, a hand reaching, and places it in different contexts. The expression becomes a communication to the viewer, a metaphor begging for a reading into the deeper meaning of the act. The hand reaches out of the ocean on a rainy day, a pile of garbage, a field of ducks. Is the hand an invitation? A threatening gesture? Does the figure in the photo need help? Do we? Or both? These photos, mini poems on humanity, aim to highlight the â€˜bizarreâ€™ within the everyday faÃ§ade of normal situations. This series, like all of Wrightâ€™s work, looks into our interpersonal connections to our surroundings, both to the natural and to each other, and explores our relationship to both.

Ruben Millaresâ€™ work speaks to the balance between man and nature. This series of mobiles physically focuses on the idea of equilibrium. Millares says, by using personal metal hangers, consumed shell fish and leftover construction materials that would otherwise be discarded, I bring human excess back to productive means. The mobiles move in concentric circular patterns at the mercy of the wind or water creating new and recycled energy from waste. Millares approaches ink drawings from an emotional stand point, letting the ink and water guide his internal feelings onto the paper. By using different tools, he is able to create ever changing textures within a traditional medium. The drawings, like the mobiles are impermanent even though they are fixed on a piece of paper. In this exhibit the artist presents mobiles and drawings together in a multisensory environment that is foreign yet known.
By presenting man-made materials in harmony with natural ones, we begin to see how man tries to create the beauty inherent in the natural world. Can it be done? Can we surpass the natural? Or is it the balance that is ultimately more important?

Antonia Wright is a Miami born Cuban-America artist, whose work employs photography, poetry, performance, installation, video art and the interaction between both forms. She received an M.F.A. in poetry from the New School University in New York City and is a graduate from the International Center of Photographyâ€™s General Studies Program. She has been reviewed in numerous publications such as The Daily News, The Miami Herald, The New Times, and was recently featured in New York Magazineâ€™s article, â€œThe New Talent Show: Pot-Luck Cultureâ€, on upcoming artists. She has shown in museums and galleries in New York, Miami, and exhibited in Amnesty Internationalâ€™s exposÃ© on Cuban-American artists in Los Angeles. She is also the curator of The Keys Project, an ongoing multi-city venture whose aim is to document and collect keys and portraits of their possessors. www.thekeysproject.com. Antonia is currently the assistant to the curator at The Margulies Collection.

Ruben Millares is a 1st generation Cuban American musician, composer, visual artist and entrepreneur born in Miami, Florida. He began playing drums at the age of 3 Â½ and soon moved on to guitar which has remained his passion ever since. With his band Smiling Gums, he has been performing around the country for the past 10 years incorporating afro Cuban rhythms and improvisation into rock n roll. As a visual artist he creates abstract landscape Sumi Ink drawings and metal, wire and shell mobile sculpture, both of which can be seen at his self designed office space in Coral Gables. His office design for the familyâ€™s CPA and Asset Management firm was awarded the2008 Outstanding Interior Office Space Award by the Coral Gables Chamber of Commerce. Ruben is a Certified Public Accountant (CPA) as well as a Certified Financial Planner (CFPÂ®) and is also involved with extensive charity work for the Daily Bread Food Bank of South Florida as well as other organizations such as Lotus House. www.smilinggums.com www.millares.net