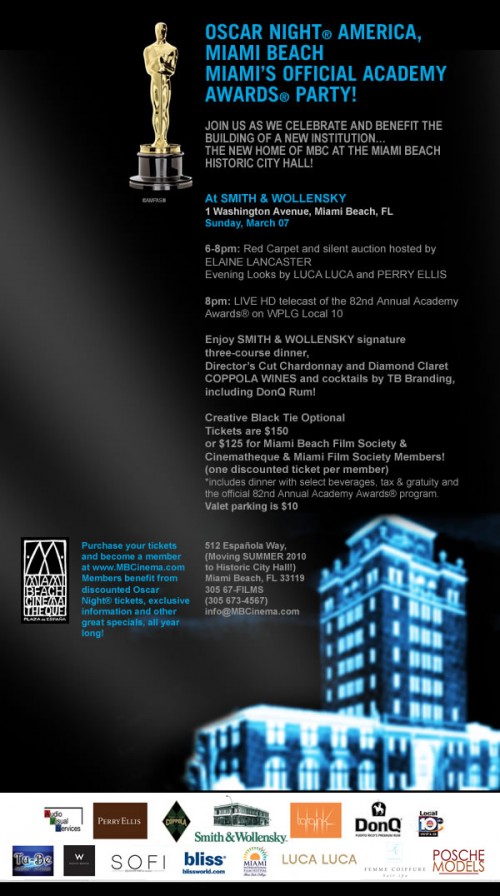 The Academy of Motion Picture Arts and Sciences has selected the Miami Beach Film Societyâ€™s Cinematheque for the eighth year in a row to host and be the beneficiary of the official celebration in Miami for the Oscar NightÂ® America (ONA) party. Oscar NightÂ® America viewing parties are the official nationwide celebrations of the OscarsÂ®. ONA Miami Beach 2010, presented by Miami Beach Film Societyâ€™ Cinematheque and Smith & Wollensky, will take place on OscarÂ® Sunday, March 7, 2010. Smith & Wollensky, the premier, waterfront steakhouse in South Beach, is located at 1 Washington Avenue, Miami Beach, FL.

The Oscar NightÂ® America, Miami Beach red carpet and silent auction will be hosted by diva extraordinaire Miss Elaine Lancaster. Red carpet arrivals will begin at 6:00 p.m. offering fabulous evening looks courtesy of LUCA LUCA and Perry Ellis. All fashion will be showcased by Posche Models with hair styling and make-up by Femme Coiffure Hair Spa. Guests will then watch the OscarÂ® telecast live from the Kodak Theatre at Hollywood & Highland CenterÂ® in Hollywood starting at 8:00 p.m. (EST) on WPLG Local-10. Attendees will toast Oscar winners while enjoying Smith & Wollenskyâ€™s signature three-course dinner with Directorâ€™s Cut Chardonnay and Diamond Collection Claret by Coppola Wines, while bidding on exciting items during the eventâ€™s silent auction. OscarÂ® fans will also be able to predict the nightâ€™s winners using a ballot system and become eligible to win great prizes! Oscar NightÂ® promises an experience that exudes the classic glamour and luxury of the 82nd Annual Academy Awards, complete with the Academy AwardsÂ® show program booklet for all guests.

The Miami Beach Cinematheque is Miamiâ€™s leading art cinema, an all digital screening room and photographic arts gallery located at 512 EspaÃ±ola Way on South Beach, with programming throughout the year including screenings of OscarÂ® winning and nominated films in many categories. This yearâ€™s annual ONA fundraising event will benefit the Cinemathequeâ€™s upcoming move to the historic Miami Beach City Hall in summer 2010. MBC is the only officially sanctioned beneficiary of the Miami Oscar NightÂ® America.

Smith & Wollensky Miami Beach opened in 1997 and is located in beautiful South Pointe Park. The southernmost restaurant in Miami Beach, the steakhouse has stunning oak and marble interior, views of the downtown Miami skyline, and serves as the perfect setting to view cruise ships passing through the Government Cut shipping channel. The restaurant seats up to 600 people â€“ 450 on two floors, 75 in the Grill and 30 in Mrs. Wollensky’s Cigar Bar. Smith & Wollensky is located at 1 Washington Avenue in Miami Beach, Florida. For more information or to make reservations (besides Oscar NightÂ®), please contact 305-673-2800 or visit www.smithandwollensky.com.