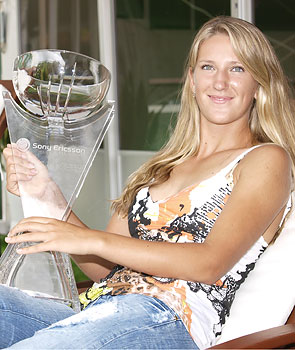 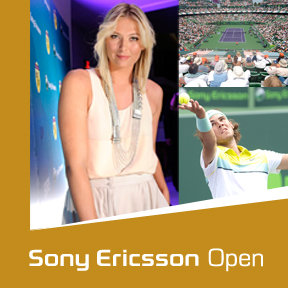 Format
One of the only combined 12-day tennis event on the ATP and Sony Ericsson WTA Tour calendars, the Sony Ericsson Open features the world’s top-ranked pros – 96 men and 96 women – in singles competition, and 32 men’s teams and 32 women’s teams in doubles action.

Single-session tickets for all 24 sessions of the 2010 Sony Ericsson Open are on sale now. Fans can purchase tickets by calling the Sony Ericsson Open Ticket Office at (305) 442-3367 or by going online at www.sonyericssonopen.com.

The 26th edition of the Sony Ericsson Open is scheduled for March 22-April 4 and will once again feature the top-96 players on both ATP and Sony Ericsson WTA Tours competing at the Crandon Park Tennis Center for one of the most prestigious titles in tennis.

But the Sony Ericsson Open is more than just tennis, it is a total entertainment experience. High fashion, fine food, fabulous shopping and celebrity musical performances have made the tournament the most glamorous on tour.

Donâ€™t miss any of the action. Secure your seats for 2010 and watch the best players in the world including Roger Federer, Rafael Nadal, Andy Roddick, Maria Sharapova, Serena Williams and Venus Williams as they battle on the purple courts for one of the most coveted trophies on tour.

In addition to the single-session tickets, the Sony Ericsson Open also has Ticket Packages and Vacation Packages available to suit everyoneâ€™s needs.

ABOUT THE SONY ERICSSON OPEN: The 2010 Sony Ericsson Open will be played March 24-April 4 at the Tennis Center at Crandon Park in Miami. The 12-day combined event, founded by Butch Buchholz in 1985, is owned and operated by IMG. The Sony Ericsson Open is one of nine ATP Masters Series events on the ATP calendar, a Premier Mandatory event on the Sony Ericsson WTA TOUR calendar, and features the top men’s and women’s tennis players in the world. In 2009 British standout Andy Murray defeated Novak Djokovic for his first Sony Ericsson Open title, while rising Belarusian star Victoria Azarenka knocked off Serena Williams to capture her first title in Miami. For ticket information, call (305) 442-3367 or visit the website at http://www.SonyEricssonOpen.com.