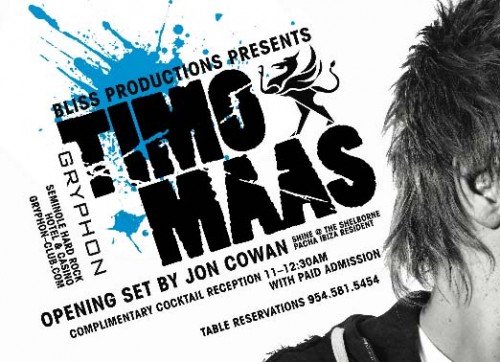 Bliss Productions is proud to welcome Superstar DJ TIMO MAAS to Gryphon @ the Seminole Hard Rock Hotel & Casino on Wednesday Nov 25th (thanksgiving eve) – Timo is no stranger to the South Florida scene selling out venues such as Groovejet, Space and Crobar during his reign as a top 10 ranked DJ in the world. Currently, Timo has been a regular at clubs like Cocoon in Germany and Circoloco in Ibiza gracing the decks next to superstars like Luciano, Ricardo Villalobos, and Sven Vath to name a few. This will be one of few USA appearance so do not miss this rare treat. After a small break from the scene all together the man can now be found morphing his sounds from Timo of past with the new techno/house bassline driven sound of Timo present. Timo claims to have finally found his true identity musically in which he claims every set tells a true story. Alongside Timo is long time friend and Pacha Ibiza & Shine resident DJ Jon Cowan. After a long summer traveling abroad and with the resurgence of his DJ career he has been invited to officially join the highly regarded Pacha stable of artists. With a string of shows right here in his back yard lining up Jon’s next step is – Gryphon, Thanksgiving Eve featuring Timo Maas & Jon Cowan – complimentary cocktail reception until 12:30am with paid admission – see you all on the dancefloor”