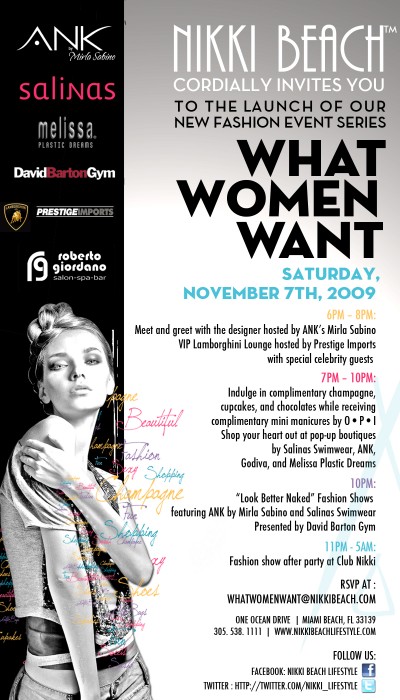 â€œWhat Women Wantâ€ is a unique concept spread out over a series of fashion events on the first Saturday of each month, kicking off November 7th, 2009.

In what will be the most anticipated Saturday night out in Miami, every month Nikki Beach will pick and promote a favorite brand by creating a one-of-a-kind fashion event featuring the new collection along with a pop-up boutique on-site.

Targeting the ultimate fashionistas, trendsetters, and influential elite, all part of Nikki Beachâ€™s existing clientele, this concept will draw the best crowd in town. In true Nikki Beach style, the event will be centered around champagne, sweets, and shopping, indulging every womanâ€™s guiltiest pleasures.

â€œWhat Women Wantâ€ will kick off at 6pm with a meet and greet hosted by ANKâ€™s Mirla Sabino and a Lamborghini VIP lounge hosted by Prestige Imports with surprise celebrity guests.