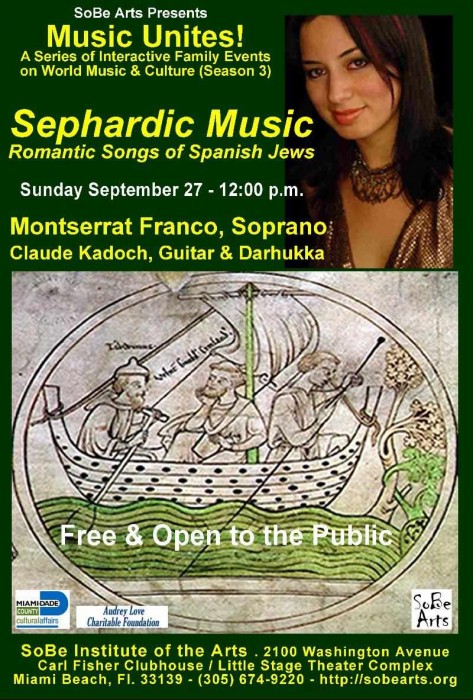 For centuries, the legacy and traditions of Sepharad (Spain in Hebrew) was transmitted through generations of Sephardic Jews on their Diaspora after they were ousted of Spain in 1492 and settled in several parts of Europe, North Africa and the Middle East. They left Spain but never their language â€œDjudeo-Espanyolâ€ also called â€œLadinoâ€ (a language which defer from the Spanish or Castillan spoken by Christians at that time and which includes Hebrew elements and vocabulary from the local languages) neither the culture which includes an amazing oral tradition : tales, poems and songs or â€œRomancerosâ€ just as the â€œTrovadoursâ€ will perform in the Middle Age.

The vast collection of Romances preserved and transmitted for generations will come back to life on September 27th when Singer â€œMontserrat Francoâ€ will present in an unique venue accompanied by the Israeli Moroccan Artist Claude Kadoch. These songs express not only these historical changes but also the entire life-cycle of that people, with their moments of joy, sorrow and love, its festivities and celebrations. This rich and varied culture is the basis of the Ladino repertoire, a musical treasure that never ceased to grow in the new places where the Sephardic Jews settled.

About the Artist: Montserrat Franco, a graduated Vocal Professor, ethnomusicologist and grantee of several scholarships by the European Parliament in Madrid, Spain and the State of Israel researched about the Sephardic Romances and Traditions from 1999 to 2002.