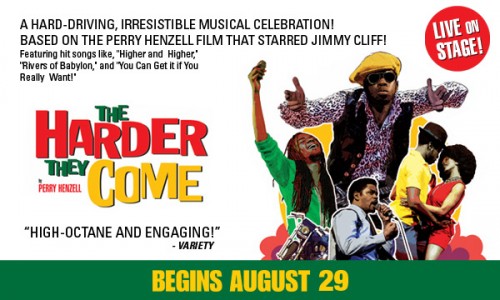 This Summerâ€™s Biggest Reggae Event
The Harder They Come
Premiere In The United States at The Adrienne Arsht Center For The Performing Arts Of Miami-Dade County direct from Londonâ€™s West End, the musical based on the 1970â€™s cult film that transformed reggae music and singer Jimmy Cliff into international sensations.
Begins August 29
Ziff Ballet Opera House
Come see the reggae event of the year! In this hard-driving, irresistible musical celebration, young singer Ivan Martin heads to Kingston with dreams of becoming a reggae star, but a corrupt and drug-fueled music industry drives him into a fast and furious life as Jamaica’s most-wanted outlaw and most-celebrated underground star.

The Adrienne Arsht Center for the Performing Arts of Miami-Dade County is proud to present, for the first time in the United States, the internationally acclaimed hit musical THE HARDER THEY COME, opening August 29 in the John S. and James L. Knight Concert. Direct from Londonâ€™s West End, THE HARDER THEY COME will offer audiences a peek into the journey of an aspiring reggae star as depicted in the 1972 international breakthrough film that caused a reggae music explosion heard around the world.

Hailed by Time Out as â€œa real thrillâ€¦the band is tight, the clothes are right â€“ itâ€™s a sure-fire smash hit,â€ THE HARDER THEY COME features a cast of 16 Jamaican-born performers and tells the story of young singer Ivanhoe Martin (played by Rolan Bell) as he arrives in Kingston, Jamaica with dreams of becoming a reggae star. A corrupt and drug-fueled music industry drives him into a fast and furious life as Jamaicaâ€™s most-wanted outlaw and most-celebrated underground star. Reggae music star and pioneer Jimmy Cliff starred in the â€˜70s film of the same title, which catapulted the islandâ€™s signature sound into a globally recognized and respected genre, turning Jimmy Cliff and reggae music in general, into an international sensation. â€œWith top-class acting, singing and dancing, [this] superb production faithfully distils not just the movieâ€™s music and characters, but also, somehow its soulâ€ (The Standard).

â€œThe Harder They Come made music history, introducing the world, and the United States in particular, to reggae music. Miami, in the summer of 2009, will be long remembered as the epicenter of cultural history as we host the U.S. premiere of this hit musical at the Adrienne Arsht Center,â€ said Adrienne Arsht Center President and CEO, M. John Richard. â€œWith three international stage productions to enjoy this summer, including the return of last summerâ€™s smash-hit Celia: The Life and Music of Celia Cruz and the visual spectacular Fuerza Bruta, South Florida has a world of entertainment options that reflect the diversity of our resident community.â€

Accompanied by a killer band of outstanding reggae musicians, the cast performs all the classic songs from the film soundtrack, including â€œBy the Rivers of Babylon,â€ the title song, and the unforgettable global phenomenon, â€œYou Can Get It If You Really Want.â€

The film of THE HARDER THEY COME was written, produced and directed by the late Perry Henzell. Perry also wrote the book for the musical, which was originally produced by Theatre Royal Stratford East and UK Arts. The West End production, which comes to Miami is directed by Kerry Michael and Dawn Reid and produced by Jan Ryan and Robert Fox.

THE HARDER THEY COME is sponsored in part by Heineken USA Incorporated.

TICKETS
Tickets for THE HARDER THEY COME are on sale now. Single ticket prices range from $50 and $95 and can be purchased through the Adrienne Arsht Center box office at 305.949.6722 or online at www.arshtcenter.org. For information on group sales, please call 786.468.2326.