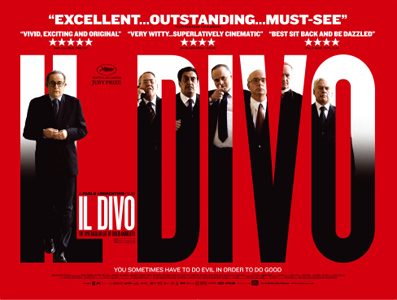 In Rome, at dawn, while everyone is sleeping, one man is awake. That man is Giulio Andreotti. He’s awake because he has to work, write books, move in fashionable circles, and, last but not least, pray. Calm, crafty, and inscrutable, Andreotti is synonym of power in Italy for over four decades. He emerges unscathed from everything: electoral battles, terrorist massacres, slanderous accusations. He is untouched by it all, unchanging. Until the counter power in Italy, the Mafia, declares war on him. . .
WINNER: Cannes Film Festival 2008 Jury Prize
David di Donatello Awards Best Actor, Best Cinematography, Best Music
â€œVery Witty. . .SUPERLATIVELY CINEMATIC!â€-Empire
â€œIL DIVO IS THE TRUE ARTHOUSE JEWEL OF THE YEAR!…From Italy or anywhere else.â€-Evening Standard
â€œSIT BACK AND BE DAZZLED!â€-Total Film
For tickets click HERE