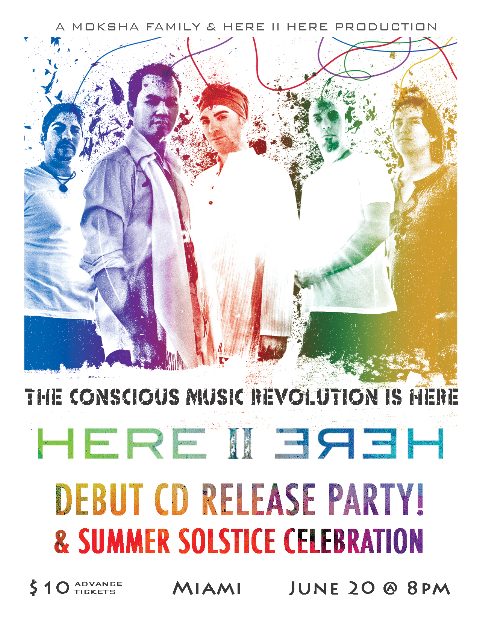 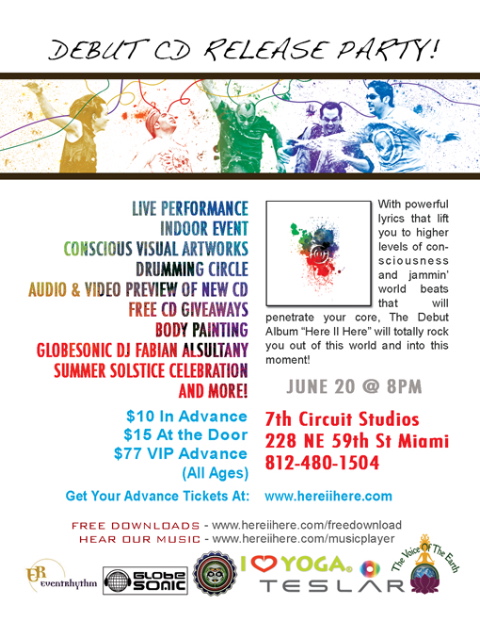 HERE II HERE, the soulful Miami-based band recently featured on Good Morning America will host a Summer Solstice Bash complete with live performances, fire dancers and a drum circle, June 20th, to commemorate the release of their first full-length album. Presented by Miamiâ€™s own Moksha Family Productions at 7th Circuit Studio (228 NE 59th St.), festivities begin at 8 p.m. and will include performances of the bandâ€™s hits such as â€œBesitos Chiquiticos,â€ â€œYesâ€ and â€œHoly.â€

Organically connected through chance meetings, HERE II HERE band members Edwin Itoh, Jaime Triana, Alex Perez, Kazuhiro Itoh and Ashley Ruiz (formerly of Menudo) came together in 2004 and have been inspiring crowds with lyrics of awareness, harmony, laughter and love ever since. Their easy-to-understand, catchy tunes form a genre of their own: entertainment with awareness, truth, laughter, peace and love.

â€œMusic is the invitation for everyone to notice the connection and harmony that exists in the world,â€ band manager Bryan Reeves says. â€œIt promotes an awareness of reality. When we understand just how interconnected we really are, it makes relationships and creativity flow and inspires peace.â€

Sponsored in part by Moksha Production Family and nonprofits The Voice of The Earth and The Environment Coalition of Miami Beach, the Summer Solstice Bash will bring together and honor spiritual community leaders and provide vegetarian tastes courtesy of Live Food, Sublime and Jefâ€™s Tomato Toasties.