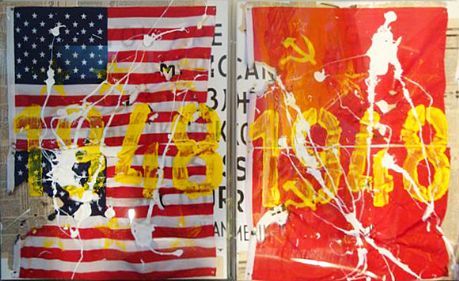 RSVP to Ema Kaiser at ema.k@gmx.at

Born May 10th, 1965 in Germany, Reitz lived between the US and Germany throughout her childhood and took a keen interested in art due to the constant exposure of moving around due to her fatherâ€™s career. After being refused entry to art school, Reitz switched career pursuits to communication and took up an advertising job with Saatchi & Saatchi, but still yearned to make art.

After the birth of her first daughter, Reitz quit her job and began painting. Working tenaciously she produced a large amount of paintings and was quickly noticed; her first exhibition sold out after two days.

Over the last 10 years, Reitz has participated in over 40 exhibitions including a solo exhibition at Dresdner Bank at Pariser Platz, Berlin, for the re-opening of Brandenburg Gate hosted by Bill Clinton and German Chancellor SchrÃ¶der in 2002.

Her move to Berlin in 1993 and living with the everyday effects of Berlinâ€™s political history had a significant political influence on Reitz. This is evident in much of her paintings which often comment on the â€˜heavy hand of politicsâ€™ and civil injustices. Appropriating current events such as a Turkish girl who was shot in the middle of Berlin by her own brother for not abiding by the Muslim practices of her family and girls trying to live up to the misleading glamorous lifestyle of the rich and famous, Reitzâ€™s work hones in on Global issues that affect our day-to-day lives.