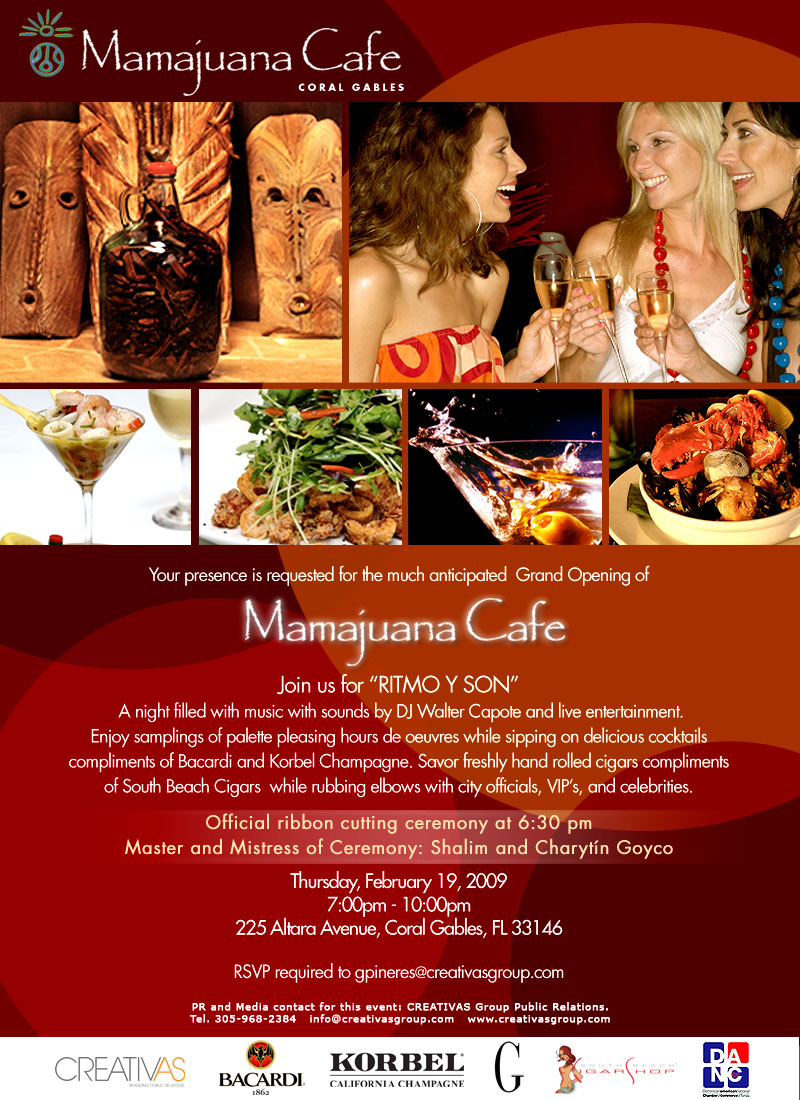 MAMAJUANA CAFÃ‰ CELEBRATES A GRAND OPENING IN TRUE â€œMIAMI STYLEâ€
Coral Gables, Florida which is no stranger to
fine dining establishments is about to get a culinary boost from an
indigenous Dominican miracle potion named â€œMamajuanaâ€. The owners of the
famous Mamajuana CafÃ© in New York are ready to open their doors locally and
treat Miami residents to the feel, sights, tastes, and sounds that have had
the Big Apple buzzing for years.

A formal ribbon cutting ceremony will take place at 6:30 pm with Coral
Gables city officials, celebrities and the owners of Mamajuana (Victor
Osorio, Carlos Saint-hilaire). Following that â€œwelcomeâ€ into the South
Florida community, the kick off celebration will commence. Passed hors de
oeuvres, Mojitos courtesy of Bacardi, Champagne courtesy of Korbel and fresh
rolled cigars courtesy of South Beach Cigar Shop will keep guests of this
high end soiree smiling as they are the first to step foot into Mamajuana in
Miami.

Mamajuana represents a place where all five of the senses will delight.
Nestled across the street from â€œThe Village of Merrick Parkâ€ Mamajuana CafÃ©
will embark guests on a journey to a far off â€œparadiseâ€. A full-on
entertainment and dining experience, Mamajuana Cafe was created for the
patron possessing an appreciation for culture, art, and cuisine. The venue
is an attraction in itself as it stays true to pre and post Columbian
Dominican culture.

The owners of Mamajuana CafÃ© considered every detail as they carefully
blended pre-Columbian artifacts and feel with old world Spanish
architecture. The name â€œMamajuanaâ€ itself is derived from a drink created by
the Taino Indians who are indigenous to the Dominican Republic. The
Mamajuana drink is a concoction made of herbs, roots, rum, and wine which
has been used as a cure all that treats everything from impotency to the
flu.

Much like the Mamajuana drink the CafÃ© will act as a cure all for patrons as
the venue transports them from the mundane to an exotic Dominican paradise.
One can indulge in amazing cocktails, an award-winning wine list (under the
direction of Sommelier Yamil Martinez) and live entertainment. But the real
star of the show is the cuisine. Acclaimed Chef Ricardo Cardona, a pioneer
of Nuevo Latin Cuisine who created the Mamajuana menu in New York will
oversee the kitchen creating the menu in Miami as well. Cardona, who has
been featured in numerous publications including The New York Times, The
L.A. Times, and The Chicago Tribune, has worked in a variety of French and
American restaurants before accepting his current task at this venue
situated in one of the most prominent areas of South Florida.

On Thursday February 19th 2009 the grand opening will be like an awards
ceremony complete with a red carpet filled with local, regional and
national/international celebrities and dignitaries including: Aide to Miami
Dade County Mayor Carlos Alvarez, Roddy Gomez, Coral Gables Chamber of
Commerce and the Dominican American National Chamber of Commerce, Florida.

Onlookers will get to feast their eyes on all that equals a â€œwowâ€ factor
such as the most fabulous exotic vehicles out in the market parked out front
courtesy of Elite Luxury Services, body painted models and performers
courtesy of Zhantra Entertainment and Drawing on People, music, surprise
performances and much, much, more. Once inside the venue, guests will

have the opportunity to sit amidst the beautiful ambiance the ownership had
created, including original artwork by artist Alex Yanes.

The Mamajuana grand Opening will take place with a ribbon cutting at 6:30pm,
cocktail reception with music from 7-10pm.

Got It Concierge, Gables Magazine, One Source Branding, and the UM
Transplant Foundation.