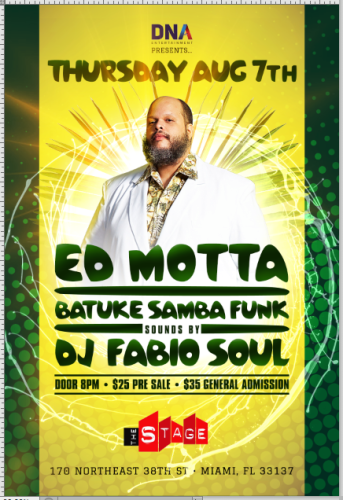 Ed Motta long-ago established himself as a force in the world of Brazilian pop, soul and funk. His latest set AOR, released in 2013 by Lab 344, proves he is still vital within the realm of Musica Popular Brasileira and The Stage Miami is set to host him along with Batuke Samba Funk and DJ Fabio Soul on Thursday, August 7, 2014. General admission tickets are $25 in advance (available online at bit.ly/EdMotta080714), $35 on the day of show.

â€œWe have been trying to bring Ed Motta to The Stage for quite some time now and we are excited about the opportunity to showcase him and his amazing live bandâ€ says Johann Torres, The Stageâ€™s talent buyer and CEO of DNA Entertainment, one of the nightâ€™s presenting sponsors. â€œWe feel that pairing him with one of our favorite local acts in Batuke Samba Funk is ideal and look forward to a special evening of Afro-Samba, Brazilian pop and soul.â€ The evening will also feature sets by DJ Fabio Soul, the eveningâ€™s other presenting sponsor.

Batuke Samba Funk are a bilingual (Portuguese / English), high-energy Brazilian band that mixes rhythms such as funk from the 70’s with Afro-Samba, Brazilian big band, Batucada, soul and R&B. Formed in Miami in 2008 by bassist, composer, producer and Rio de Janeiro native Diogo Brown, the sextet also features guitarist Cezar Santana and is often augmented by a three-piece horn section. The goal of Batuke is to â€œBrazilianizeâ€ American sounds and “Americanize” Brazilian sounds in a perfect balanced fusion. The band is currently promoting its latest single â€œMas Que MoÃ§a Bonita,â€ a smooth Brazilian pop number that sounds like a modern-day take on Sergio Mendes Brasil 66.

ABOUT THE STAGE MIAMI

The areaâ€™s premier live music venue The Stage Miami is nestled in the heart of the cityâ€™s resurgent Design District. The Stage aims to celebrate art and culture and the basic elements of artistic expression, the marriage of song, cinema, literature and theatre â€“ all packaged seamlessly and coupled with a polite, caring staff, friendly management and ultra-clean facilities.

The Stage was recently named one of three finalists for the Greater Miami Chamber of Commerceâ€™s Top Minority Business Awards in the â€œThatâ€™s So South Floridaâ€ category. Host to local, regional and national musical acts, the space is also available for private and corporate events and now offers free WiFi service.