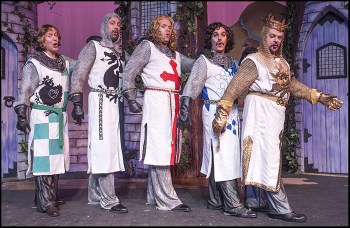 Monty Python’s Spamalot, the 2005 Tony Award-winner for Best Musical, returns to spread laughter and cheer throughout the Kingdom of South Florida for a limited engagement. Lovingly â€œripped offâ€ from the internationally famous comedy teamâ€™s most popular motion picture, â€œMonty Python and the Holy Grail,â€ it turns the legendary tale of King Arthur and his Knights of the Round Table on its head with a chorus line of dancing divas, knights in tights, flatulent Frenchman and killer rabbits. It won three 2005 Tony Awards including Best Musical and Best Director (Mike Nichols), as well as the Drama Desk and Outer Critics Circle awards for Best Musical. The original cast recording of Monty Python’s Spamalot won the 2006 Grammy Award for Best Musical Show Album.

Directed by the award-winning David Arisco, Monty Python’s Spamalot features a book by Eric Idle, with music and lyrics by the Grammy Award-winning team of Eric Idle and John Du Prez.

“The most amazing aspect of SPAMALOT is that it works for both Monty Python fans AND musical theatre fans,” said Director David Arisco. “This is a huge Broadway musical with multiple large-scale and outrageously funny numbers, and it’s a perfect homage to Monty Python’s unique brand of humor.”

Leading the quest is King Arthur (Gary Marachek) with his trusty servant Patsy (Paul Louis). Playing his gallant knights – and a broad assortment of other characters – are Jim Ballard as Sir Lancelot the Homicidally Brave, Gabriel Zenone as Sir Robin the Not-Quite-So-Brave-as-Sir-Lancelot, Shane Tanner as Sir Galahad, the Dashingly Handsome, Wayne LeGette as Sir Bedevere, the Strangely Flatulent, and Lindsey Forgey as The Lady of the Lake, a tour-de-force role for any comedic actress. University of Miami alumnus Jose Luaces plays multiple roles including Prince Herbert, Historian, Not Dead Fred, a French Guard and a Minstrel.

Preview night tickets on the first Wednesday and Thursday are $42. Tickets for weeknights and matinees are $47, and on Friday and Saturday evenings $55. The theatre offers a 10 percent senior discount rate the day of performance and $15 student rush tickets 15 minutes prior to curtain with identification. Discounts are based on availability and exclude Saturday and Sunday.