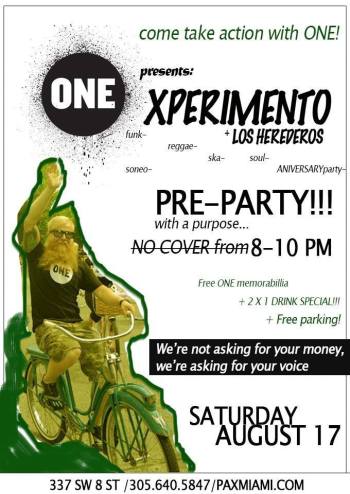 One Campaign Join the fight against extreme poverty. Actions.Speak.Louder.

Night of Advocacy in Action

MIAMI â€“ MIAMI â€“ ONE, in conjunction with PAX anniversary, will be holding a meet and greet with ONE Congressional District Leaders Betsy Skipp, Alix Gordon, Dani Bernal and Erica Bovea. Together they will be hosting a night of advocacy and action for the worlds poorest people by providing information of their current campaigns as well as volunteer opportunities – August 17, 2013 from 8:00pm-10:00pm.

From 8 p.m. to 10 p.m. there will be free entrance for the nightâ€™s festivities and all who come early will have a chance to receive ONE memorabilia. At 10 p.m. the official PAX Anniversary party starts and Xperimento & Herederos, a bilingual, multicultural band that blends world sounds take the stage.- Starting at 10:00pm until closing- $10.00.

As part of our ongoing efforts to raise public awareness about the issues of global poverty, hunger, disease and efforts to fight such problems in the world’s poorest countries, ONE Miami members take monthly actions and promote awareness building to draw attention to these issues and to engage and encourage everyone to become a champion.

In supporting ONE + PAX you would not only be supporting a most worthy cause, but would also strengthen Miami’s reputation in the international community and among the citizens of Miami.

Contact: Betsy Suero Skipp ONE Congressional District Leader (305)495-2755, or via e-mail at miaresults@yahoo.com