The World Premiere of The Pleasure is…All Mime 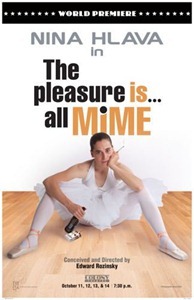 The World Premiere of â€œThe Pleasure isâ€¦. all Mimeâ€ comes to the Colony Theater from October 11 â€“ 14. This exciting celebration is a two-act pantomime show created and produced by world renowned pantomime expert Edward Rozinski and performed by acclaimed actor Nina Hlava.

Creator, producer and director Edward Rozinsky (stage director, dramatist, educator, actor), has lived in South Florida for over 30 years from the former USSR. Considered to be one of the main authorities in the world on the rare art of Pantomime, his disciples can be seen in significant scenarios such as Cirque de Soleil. His apprentice Slava Polunin is the star of the internationally acclaimed "Slava’s SnowShow." A resident of South Florida and published author, Edward Rozinski teaches at UM, FIU and New World School of the Arts. His book, "Essential Stage Movement" and unique video-course in stage movement allow students to learn and practice their stage movement techniques online.

This unforgettable play showcases the talents of Austrian actress Nina Hlava, an accomplished actor who has been on stage since the age of 8. She studied pantomime with French actor and mime Marcel Marceau and other notable artists and teachers in Europe. She successfully toured Europe and Japan as a part of ensemble and with her solo shows. Aside from been an accomplished actor, Nina is also a  teacher and holds a PhD from Prague University, Czech Republic in Physical Theater and Pantomime.

"The Pleasure is… all Mime" is the outcome of the creative collaboration between the creative genius of Edward Rozinski and the unparalleled talents of Nina Hlava. The production’s main theme is a caricature of todayâ€™s pop culture. Touching on subjects such as pop stardom, public education, reality TV loneliness, drug use and corruption, all pieces express a message though the amazing art of silent action.

By addressing current events, this two hour play breaks barriers and it is suitable for adult audiences from around the world. The use of projected graphic animations, accompanied by music, tap dancing, acrobatics, puppetry, and juggling make for a dynamic entertaining reflection.