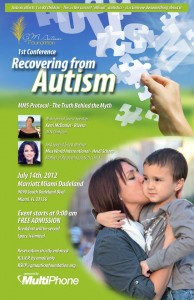 July 14th, 2012 GM Autism Foundation will be hosting its first autism conference at the Dadeland Marriot in Miami FL. This conference will kick off a series of conferences addressing various biomedical treatments that are currently being performed on children affected by the condition broadly defined as autism spectrum disorders (ASD).

We are proud to have autism recovery pioneer and parent of a recovering child, Kerri McDaniels Rivera. Mrs. Rivera runs the AutismO2 clinic in Puerto Vallarta, Mexico. She has been using a protocol known as MMS, which includes the use chlorine dioxide (CL02), and has been the recent source of much controversy. Mrs. Rivera will be discussing the significant improvements she has see with the use of this protocol, as well as dispelling many of the myths that have been circulating in the media regarding the protocol.

GM Foundation is a nonprofit organization that looks to disseminate information on biomedical treatments for autism. Created as a labor of love by Myrna Sterling, and named as a tribute to her son Gian Marco, the foundation also provides important, albeit limited financial support for families who otherwise could not afford such treatments.