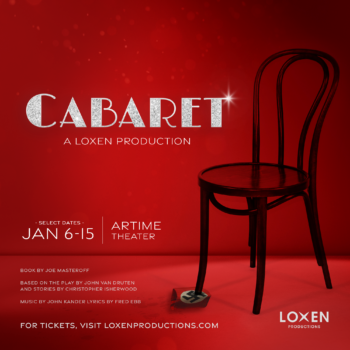 Loxen Productions is bringing the provocative, multiple Tony-award winning musical, Cabaret, to the ARTime theater! Premiering January 6 through January 15, Cabaret will be Loxen’s first production in their new home, the historic ARTime Theater. The multi-Tony award-winning musical based on Christopher Isherwood’s Goodbye to Berlin, follows the adventures of a struggling American writer in 1931 Germany, where he encounters the vivacious nightclub singer Sally Bowles, a performer at the infamous Kit Kat Club. As the romance between Sally and Cliff develops, audiences watch as the declining morality in Berlin gives way to the looming rise of Nazism, just a few short years before the world would fall victim to World War II. With a book by Joe Masteroff, music and lyrics by John Kander and Fred Ebb, Cabaret premiered on Broadway in 1966, with the legendary Harold Prince at the helm. The work became an instant classic with multiple revivals in the intervening years.
WHERE: The ARTime Theater in Little Havana
WHEN:Cabaret will run for a limited time from January 6 through January 15, with shows Friday through Sunday at 8 P.M. Matinee showings will run at 2 P.M. on Saturdays as well.
Tickets: Tickets are currently on sale and can be purchased online at loxenproductions.com. Prices range from $35-$100