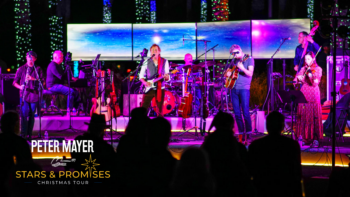 Friday Night Sound Waves welcomes locals and visitors, the young and the young at heart, to enjoy some of South Florida’s best musical talents, performing an eclectic range of genres, including Jazz, Latin, Country, Top 40, Indie, Oldies, and Classic Rock.

Attendees are invited to come early to enjoy a variety of pre-concert activities along with local restaurants and vendors, who will be providing a rotation of food and drinks to purchase before, during, and after the show.

Friday Night Sound Waves was featured in the book, “100 Things to Do in Fort Lauderdale Before You Die,” by Christiana Lilly.

• Nov. 25 – Peter Mayer Stars & Promises Tour
As the only returning act of the season, Peter Mayer, singer, songwriter, and guitarist, returns to Las Olas Oceanside Park for a stop on the 23rd anniversary of his widely acclaimed Christmas tour “Stars and Promises.” Mayer has released 25 of his own albums, toured internationally with his own band, and has been the lead guitarist for Jimmy Buffett’s Coral Reefer band for three decades. Since that first recording and tour in 1999, Mayer has released four additional Christmas albums and this year celebrates his 23rd year on the road with his world-class seven-piece band. The “Stars and Promises” concerts are engaging and made memorable with state-of-the-art sound and production. “Stars and Promises” brings its unique yuletide tradition to fans who have called this production “a Christmas show like no other!”

This event is free and open to the public.