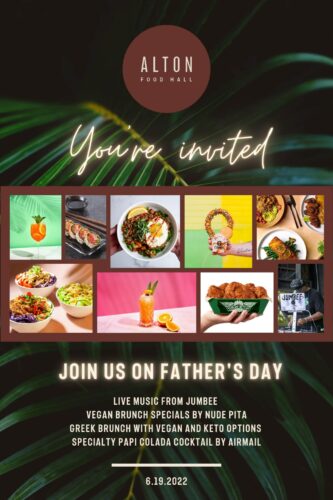 On Sunday, June 19th, Jumbee will be rocking the turntables at Alton Food Hall for Father’s Day from 12pm – 4pm. In addition to the live music, Alton Food Hall’s Father’s Day event will offer vegan brunch specials from Nude Vegan, Greek brunch with vegan and Keto options, and a specialty Papi Colada cocktail from Airmail, the in-house bar. Alton Food Hall is the latest food hall concept to debut in Miami Beach, with over 160 seats, both indoors and outdoors, officially opening April 30. Designed with locals in mind, this modern space inspired by classic Miami showcases a range of local favorites as well as a handful of stand-out national champions, promising to establish itself as the “go-to” spot that locals and visitors alike seek to tame their cravings or grab a refreshing innovative cocktail. Vendors include local and international concepts such as Dumpling King, Jugo Boss, Stoned Soup, Moonbowls, Poke House, Nude Pita, Sashiro, Shimuja, Don Pan, Los Quesudos,Tacos & Tattoos, Golden Burgers, Miami’s Very Own, Fatto Bene, Crunly, alongside national champions including Wingstop. The establishment’s focal bar goes by the name ‘Airmail’ and draws inspiration from the historic rum-based cocktail as well as Cuba’s first international flight-based postal service which originated in the 1930s.