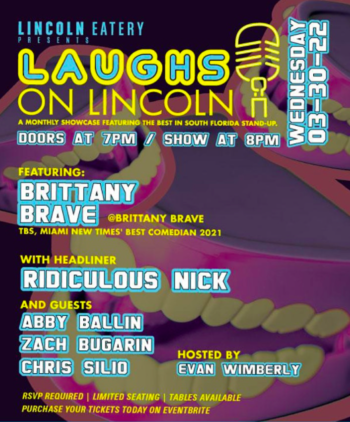 The Lincoln Eatery is hosting Laughs on Lincoln, a night full of comedy, fun, and delectable eats on March 30, 2022 at 7:00pm. According to Miami New Times and TimeOut Miami, this stand up comedy extravaganza highlights Miami as a new pioneer of comedy. The event will showcase Miami’s stand-up comedy performers and comics that have been featured on TBS, American Idol, MTV, SiriusXM, NBC and more.

For the March 30th performance, Ridiculous Nick will headline the show. Known as the king of comedy in Wynwood, Nick is commonly cracking jokes at Oasis Wynwood and other late-night hot spots in the area. Comedy-lovers can also watch his special on kweliTV.

Featured comics include:
• Brittany Brave, Miami New Times Best Comedian 2021, who has been featured on TBS, MTV, and SiriusXM. Most recently she headlined The Improv, one of the most infamous comedy clubs in the US.
• Abby Ballin, “the Straight Lesbian”, who performs over 10 times a month at known South Florida venues like Ice Box Hallandale and Redlight West Palm Beach.
• South Florida Comedy Slam winner, Zach Bugarin, who specializes in dark and clever observational humor.
• Chris Silio, “the Blind Comedian”, has been highlighted by Miami New Times and hosts his own podcast called Scheme Supreme.
• Hosted by Evan Wimberly, the founder of Comedic Distancing, a company that hosts comedy and cocktail events in Miami.

Lincoln Eatery boasts an array of culinary favorites with 10+ vendors such as Chill-N, Cilantro 27, Simply Good Pizza, and many more for guests to choose from. The fast-casual dining experience has something for everyone whether you want a quick bite, a full meal, or even just dessert. The eatery also hosts Miami’s Vice Canteen, so you can sip on reasonably-priced, Miami-themed cocktails, while enjoying the best comedy South Florida has to offer.