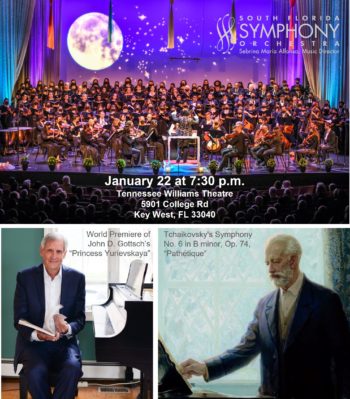 South Florida Symphony Orchestra (SFSO) rings in 2022 with the old and the new! The esteemed orchestra, conducted by Sebrina María Alfonso, will perform the world premiere of local composer John D. Gottsch’s Princess Yurievskaya followed by Tchaikovsky’s Pathétique as part of its Masterworks III series. The concert will commence on January 22, at 7:30 p.m., at the Tennessee Williams Theatre.

The concert will begin with the premiere live performance of Princess Yurievskaya by SFSO composer-in-residence, John D. Gottsch. Princess Yurievskaya charts the passionate love of Catherine Dolgorukova and Tsar Alexander II — from their first meeting and eventual marriage to his assassination. This vivid narrative is full of exciting dances and torrid romance, irradiated with evocative orchestral solos.

In June 2020, Gottsch’s debut album – featuring Princess Yurievskaya and another SFSO premiere, Sunset, was released by Naxos Records, the world’s leading classical music label. The works, performed by Maestra Sebrina María Alfonso and South Florida Symphony Orchestra, were recorded at Nova Southeastern University’s Rose and Alfred Miniaci Performing Arts Center on March 10 -11, 2020, prior to the challenges and closures of the world health pandemic.

John D. Gottsch was born in New Orleans, Louisiana and moved to Florida with his family, shortly thereafter. He spent his youth in the lake country of the Sunshine State traveling extensively and observing natural habitats. These explorations of Florida gave him an enduring love for its beauty and wildlife. He has been a lifelong composer and a number of his compositions reflect his deep appreciation of the outdoors. SFSO also performed Gottsch’s Bagatelles for Violin & Piano as part of its Summer With the Symphony Series in June 2021. His piano suite, Homosassa, premiered in Palm Beach in 2020. His piano quintet, Maryland Hunt, premiered at the Embassy of the Kingdom of the Netherlands in Washington, D.C in 2018 and has been performed in Philadelphia, Vienna, Rotterdam and Baltimore. Gottsch, a full-time doctor, now splits his time between Baltimore and Key West.

The program concludes with a work that Tchaikovsky considered to be the best of all his creations. In the last few months of his life, Tchaikovsky composed his haunting Symphony No. 6 in B minor – which made its premiere just nine days before his death. He called it “The Passionate Symphony,” using the equivalent Russian word which the French then mistranslated into “Pathétique” (meaning “evoking pity”) after his death.

Tickets for Masterworks III: Tchaikovsky & Gottsch start at $25 for the Tennessee Williams Theatre at The College of The Florida Keys (5901 College Road, Key West) and are available at southfloridasymphony.org/masterworksiii. Additional health and safety concert attendance protocols can be found on the site. Student tickets and group rates are also available by calling (954) 522-8445 or emailing info@southfloridasymphony.org.