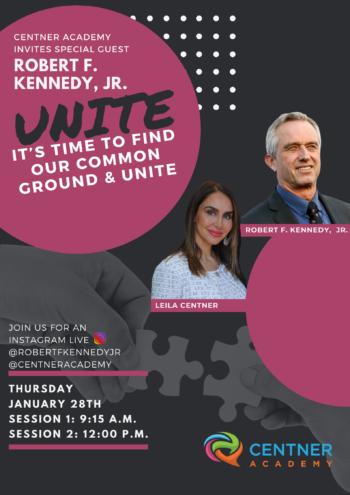 Centner Academy is excited to host Robert F. Kennedy, Jr. for two live talks on Thursday January 28th at 9:15am and 12pm. Join us live on Instagram @robertfkennedyjr and @centneracademy.

The topic of discussion will be “Unity: How We Find Common Ground & Unite.”

Kennedy is a true champion for the health and well-being of children and the planet. At this time of increasing division and fear, let us hear from this tireless advocate and defender whose wisdom and experience could show others a clear, constructive way forward.

Robert F. Kennedy, Jr. serves as President of Waterkeeper Alliance, as well as Founder, Chairman of the Board, and Chief Legal Counsel for Children’s Health Defense, and of counsel to Morgan & Morgan, a nationwide personal injury practice.

Mr. Kennedy is an esteemed author, with a long list of published books including the New York Times’ bestseller, “Crimes Against Nature.” Mr. Kennedy was named one of Time magazine’s “Heroes for the Planet” for his success helping Riverkeeper lead the fight to restore the Hudson River. His reputation as a resolute defender of the environment and children’s health stems from a litany of successful legal actions. He received recognition for his role in the landmark victory against Monsanto last year, as well as in the DuPont Case that inspired the movie “Dark Waters” (2019).