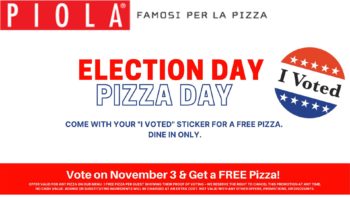 Piola (piolausa.com) will give voters wearing an official “I Voted” sticker a free pizza on Election Day – Tuesday, Nov. 3.

The offer applies to dine-in customers at all Piola locations in the U.S. Piola has two locations in Houston and six locations in South Florida. People who voted early are encouraged to save their stickers and wear them on Election Day.

“We want to celebrate one of the greatest privileges we have and that’s to vote,” said Stefano Carniato, co-founder of Piola, an international brand with locations also in Latin America and Europe.

The Election Day event coincides with Piola’s popular $7 Pizza Day on Tuesdays. The offer launched earlier this year to give customers an affordable meal option.

For details about Piola’s Election Day pizza giveaway, visit the chain’s event on Facebook. For a list of restaurant hours and locations PiolaUSA.com/locations.

About Piola
Founded in Treviso, Italy by brothers Stefano and Dante Carniato in 1986, Piola is a global Italian restaurant franchise “Famosi per La Pizza.” Piola has locations in Italy, United States, Mexico, Panama, Brazil, Argentina, Chile and Turkey. The company is known for its thin-crust pizzas and classic Italian dishes. Piola also made a name for itself by embracing the arts, hosting film premieres, book events and art exhibits. Visit PiolaUSA.com.