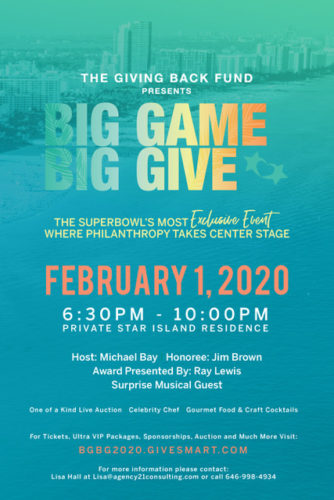 Each year, The Giving Back Fund holds its “Big Game Big Give” fundraising event at a private estate in the Super Bowl city the weekend of the big game. The premiere A-list event is taking place on Saturday, February 1st, from 6:30 p.m. to 10 p.m. at a private $65 million mansion on Star Island, and will be co-hosted by famed filmmaker Michael Bay and celebrity friends. The star-studded gala has been voted the number one Super Bowl party by ESPN The Magazine.

To date, Big Game Big Give has raised more than $10 million for worthwhile causes around the globe. This year, the event will benefit national philanthropic advancement and local Miami nonprofits including Sylvester Comprehensive Cancer Center.

Tickets are $3,000. For more information and tickets, visit https://e.givesmart.com/events/fYH/.