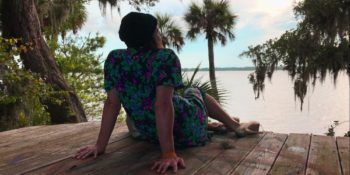 Satellite Beach Blues takes place along the Space Coast of Florida in an unspecified moment in the very near future: a transgender woman living in a cheap hotel on Florida’s Space Coast observes life in the state from the very shores where rising seas are slowly inundating the state. For this appearance at MOCA, Erica Dawn Lyle will be performing an experimental lecture in which she will read from the novel while edited sequences and soundscapes from the film-in-progress play on the big screen behind, offering a dreamlike consideration of gender transition, Florida’s legacies of colonization and real estate speculation, and the magical realist possibilities of transcendence beyond capitalism through queer lived experience. In response to the slow motion environmental collapse of Lyle’s native Florida, collaborator, Midnight Piper Forman, and Lyle (working together collectively under the name, SOBBETH) have for the past three years undertaken an ongoing multi-part exploration of the ruins of the Sunshine State’s post-war 20th century mythology.

South Florida native, Erica Dawn Lyle, is a writer, musician, and curator who lives in New York City. She is the author of On The Lower Frequencies: A Secret History of The City (Soft Skull, 2008), and her writing has appeared in Art in America, Artforum, Frieze, and on NPR’s This American Life. Since 1991, she has edited and self-published the DIY art/crime/punk magazine, SCAM. Her most recent book is Streetopia (Brooklyn, 2015). Currently she plays guitar in the bands, Bikini Kill and AquaShade.