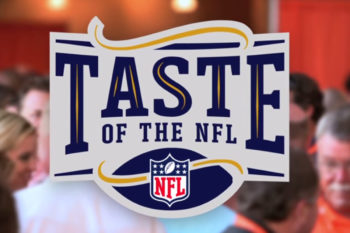 The Big Game is coming to South Florida in 2020, and so is a big party that cannot be missed – Party with a Purpose® by Taste of the NFL (TNFL). TNFL’s annual event traditionally takes place on the eve of the Super Bowl. For its 29th year, it will be held on Saturday, February 1, 2020 in Fort Lauderdale at the Broward County Convention Center. This year’s star-studded fundraising event brings together exceptional cuisine, prominent chefs from around the country, NFL players, coaches, legends and more, all to support the fight against hunger.

“When we began in 1992, our goal was to raise money in order to provide meals to those in need,” said TNFL Founder Wayne Kostroski. “Many of the recipients are children and seniors who rely on their local food banks for assistance.”

Since its inception, TNFL – one of the few organizations sanctioned by the NFL – has gathered the country’s top chefs and the NFL’s greatest players to fundraise in support of food banks throughout the United States. To date, TNFL’s programs and events have raised and donated over $26 million for food banks and hunger-related nonprofit organizations in all 32 NFL cities, resulting in more than 220 million meals distributed nationwide. This year’s team of guest hosts includes the legendary Coach Don Shula serving as the National Honorary Chair; Chef Andrew Zimmern – National Culinary Host; Chef Adam Richman – Florida Culinary Host; and Ben Leber as the National Player Host.

Tickets for Party with a Purpose® on Saturday, February 1, 2020 are now on sale at tasteofthenfl.com/tickets. General admission is priced at $700 per person. Those interested in the seated VIP section with extra perks, tables of 10 are available at $10,000.