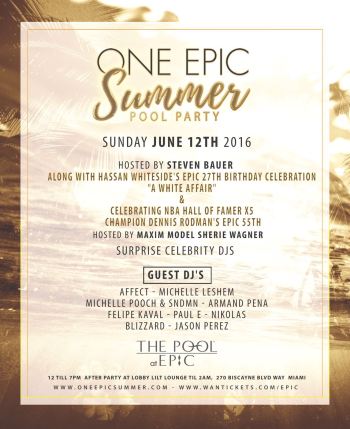 After a successful Music Conference launch we have now moved into an anticipated summer series at the pool. We will have the best of Miami entertainment with live performances, celebrity hosts, most successful DJâ€™s and the top nightlife Promoters from every venue in Miami, along with an a-list of celebrities, NBA-NFL-MLB players, models, special events and artists from every musical genre to name a few.
One Epic Summer launched successfully May 7th 2016 for the first time in Downtown Miami an event driven summer series once a month pool party on a roof top â€“ Upcoming dates: June 12, July 16, Aug 13, Sept 3, & Nov 23rd 2016 â€“ LIVE radio broadcast by Revolution Radio 93.5 FM
June 12th â€“ hosted by actor Steven Bauer of the hit TV series Ray Donovan along with Miami Heat – Hassan Whiteside 27th Epic Birthday â€œA White Affairâ€ and NBA Hall of Famer 5xNBA Champion Dennis Rodman 55th Epic Birthday hosted by Maxim model Sherie Wagner
Our purpose is to give Miami something new and different by creating a once a month summer series that is ALL about Miami. It has never been done before. We will have for the first time ever various Miami DJâ€™s all in one day time event (ongoing at each series dates) from all the top venues in Miami, as well as local artists performing live in addition to world known acts, fashion shows with local designers and models, special events from local brands, local celebrity hosted events, and much more, Our target market and audience is the people who love entertainment in Miami and the event is geared to â€œAll about Miami themeâ€ â€“ hosted by all the top promoters from all the top venues in Miami.
ABOUT: One Epic Summer
One Epic Summer is our new brand for this Summer series â€“ together we are a collaboration of Miami well-known promoters and special events producer Angelo Fresquet along with WE R MIAMI Productions and our LightFXPros production team â€“ We have been activating Music Festivals & events for over a decade as well as developing all the top venues in Miami for the past 25 years. We have always had a mission to provide the best entertainment experience to all our guests and create unforgettable brands.
For more information, contact: visit www.oneepicsummer.com or email us at afevents73@gmail.com