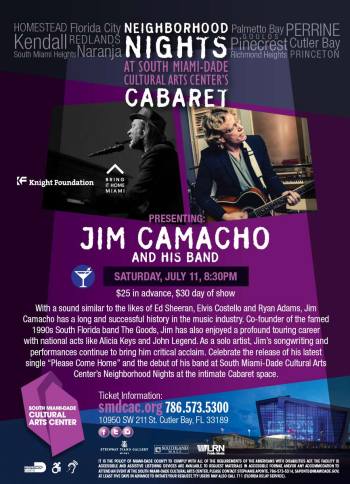 With a sound similar to the likes of Ed Sheeran, Elvis Costello and Ryan Adams, Jim Camacho has a long and successful history in the music industry. Co-founder of the famed 1990s South Florida band The Goods, Jim has also enjoyed a profound touring career with national acts like Alicia Keys and John Legend. As a solo artist, Jimâ€™s songwriting and performances continue to bring him critical acclaim. Celebrate the release of his latest single â€œPlease Come Homeâ€ and the debut of his band at South Miami-Dade Cultural Arts Centerâ€™s Neighborhood Nights at the intimate Cabaret space.

Appropriate for ages 13 and up.