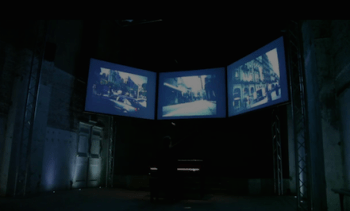 The 12 Nights Electronics and Music series welcomes Jarek Kapuscinski, an innovative intermedia composer.
Jarek Kapuscinski is an intermedia composer and pianist whose work has been presented at New Yorkâ€™s MOMA; ZKM in Karlsruhe; Centre Pompidou in Paris; and Reina Sofia Museum in Marid, among others. He has received awards at the UNESCO Film sur lâ€™Art festival in Paris, VideoArt Festival Locarno, and FNCNM in MontrÃ©al. He was first trained as a pianist and composer at the Chopin Academy of Music in Warsaw and expanded into multimedia during studies at the University of California, San Diego (1992-1997). Currently, he is Assistant Professor of composition and intermedia at Stanford University.
Â
Kapuscinski is a musician, but his music is audiovisual. â€œIt is made of sounds and images and more importantly with their relationship over time. I am interested in the emergent in-between â€“ the intermedia,â€ says Kapuscinski. His pieces indeed emerge from the formalization of the elemental and the pure. â€œThe piece is finished not when there is nothing more that I can add but rather, when there is nothing left to be removed. â€œ He believes in a thoughtful process of elimination of non-essential elements, aspiring to achieve a transparent and spacious form, that can generate complex emotional response. It is through the synthesis of complexity and simplicity that the stepping stone narratives (made of simple, haiku-like moments) mediate a rich experience. Kapuscinski is not shy to express positive feelings of joy, love, wholeness, goodness and transcendence. â€œI embrace everyday, familiar emotions and musical language that invokes them. There is richness and profoundness to be found in the common and seemingly simple.â€
Â
The program presents a retrospective of Kapuscinskiâ€™s works. It stretches from Mondrian Variations, an early work that defined my interest in composing with sounds and images both conceived simultaneously, â€œpainted on a single canvasâ€ to Where is Chopin a recent fascination with micro-expressions in faces of people from around the world as they listen to music. The first one was a result of rather solitary process while the latter involved travel to 12 different countries and private one on one sessions with over 150 people.Â  Each of the works has a rich story of its making. Having no space (or time) for that, I can probably say just a few words about the creative interests that unite them all.