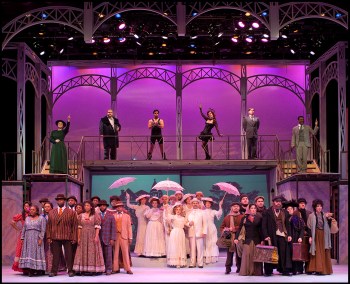 Actors’ Playhouse at the Miracle Theatre continues its celebrated 2014-2015 season with a regional premiere production of the Tony Award-winning musical Ragtime from January 28 – February 22, 2015. This sweeping musical portrait of early 20th century America tells the powerful tale of a white, upper-middle class family, an African American couple, and an Eastern European immigrant escaping to America with his daughter, as they all confront the timeless contradictions of wealth, poverty, freedom, prejudice, hope, and despair in pursuit of the American Dream. Unfolding through the fiery rhythms of Harlem and Tin Pan Alley, and the vibrant klezmer of the Lower East Side, this vivid and unforgettable Tony-winning score bursts onto the stage in what will be the largest and most epic production ever staged at the Miracle Theatre.

The cast of Ragtime in alphabetical order:

Preview night tickets on the first Wednesday and Thursday are $37. Tickets for weeknights and matinees are $52, and on Friday and Saturday evenings $59. The theatre offers a 10 percent senior discount rate the day of performance and $15 student rush tickets 15 minutes prior to curtain with identification. Discounts are based on availability and exclude Saturday and Sunday.

This event is made possible with the support of Miami-Dade County Department of Cultural Affairs, the Cultural Affairs Council, and the Miami Dade County Mayor and Board of County Commissioners for Major Cultural Institutions, and is sponsored in part by the State of Florida Department of State, Division of Cultural Affairs, and the Florida Council on Arts & Culture, with support of the City of Coral Gables, and by the following sponsors: Azamara Club Cruises, Star Alliance, TotalBank, InterContinental Miami, Lexus of Kendall, NBC Miami and South Florida Times.

*Photo: The cast of Ragtime directed by David Arisco at Actors’ Playhouse at the Miracle Theatre. Photo by George Schiavone.