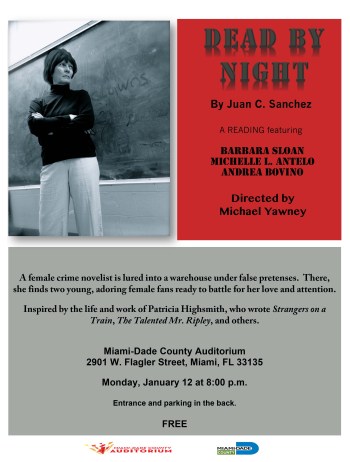 Playwright Juan C. Sanchez (Paradise Motel, Property Line) will present a free reading of his latest work Dead By Night in the Miami-Dade County Auditoriumâ€™s On Stage Black Box Theater on Monday, January 12 at 8 p.m. A female crime novelist is lured into a warehouse under false pretenses. There, she finds two young, adoring fans ready to battle for her love and attention. Dead By Night is inspired by the intriguingly complex life and work of crime novelist Patricia Highsmith, who wrote Strangers on a Train, The Talented Mr. Ripley, and others. Actresses Barbara Sloan, Michelle L. Antelo and Andrea Bovino will bring this new script to life, under the direction of Michael Yawney. Sanchezâ€™s plays have been produced in Miami, Minneapolis, Los Angeles and New York.