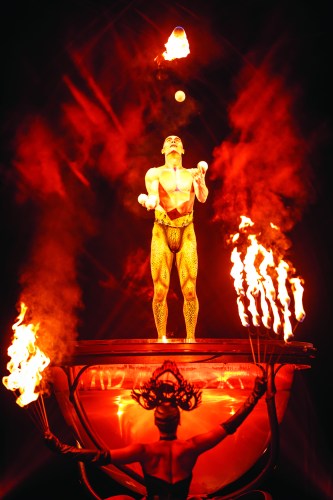 Amaluna by Cirque du Soleil will open to a packed house in Miami on Thursday December 11 at Sun Life Stadium. The cast and crew of Amaluna are finishing up shows in Atlanta, GA this week and are preparing to travel to Miami with their 2,000 tonnes of equipment, in the convoy of 65 trucks.

To celebrate the Premiere in Miami and due to an overwhelming demand, additional show dates have been added with some tickets starting as low as $35. Tickets can be purchased by visiting cirquedusoleil.com/amaluâ€¦ or by calling 1-877-9 CIRQUE. Amaluna’s show dates have now been extended to run in Miami until January 25 2015.

In the wake of a storm caused by Prospera, a group of young men lands on the island, triggering an epic, emotional story of love between Prospera’s daughter and a brave young suitor. But theirs is a love that will be put to the test. The couple must face numerous demanding trials and overcome daunting setbacks before they can achieve mutual trust, faith and harmony.

Some 30 years ago, Cirque du Soleil was but a dream. It was the dream of a small community of travelling performers who would do anything to share their love of the stage, of circus and of the world. The family has grown since then and now includes thousands of dreamers–creators, artists, technicians and workers who toil in the shadows. The dream has become a symbol of QuÃ©bec pride, an international entertainment company that has brought 35 large-scale shows to life–20 of which are still in operation. The company, which celebrated its 30th anniversary in June 2014, has brought wonder and delight to close to 150 million spectators in more than 300 cities on six continents. Cirque du Soleil has close to 4,000 employees, including 1,300 performing artists from close to 50 different countries.

Amaluna is proud to be presented by Visa Signature, the official presenting sponsor of Cirque du Soleil, in association with Citi Cards. We also gratefully acknowledge our official sponsors for Amaluna, DHL and Xerox.