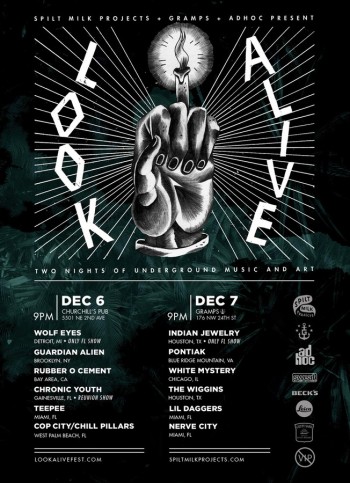 Wolf Eyes (Sub Pop, American Tapes, De Stijl),comprised of Nate Young, John Olson, and Jim Baljo, are undeniably one of the most vital, important American noise bands around today. They have released countless CD-Rs, LPs, and tapes since 1996, including collaborations with Black Dice, Smegma, Stare Case, academic jazz musician Anthony Braxton, and too many side projects to name. â€œWolf Eyes remain one of the most important experimental bands in the worldâ€ according to Pitchfork Media. Wolf Eyes were recently featured on the cover of The Wire (their second time gracing the cover of the esteemed UK avant-garde magazine), which included a feature discussing the evolution of the band, as well as its newest album, No Answer: Lower Floors (2013, CD/LP via De Stijl). Wolf Eyes will headline the first night of the fest on Friday, December 6 at Churchillâ€™s Pub, supported by Guardian Alien featuring drummer Greg Fox from Brooklyn black metal band Liturgy, a reunion set from Gainesville grunge rockers Chronic Youth, and performance piece by celebrated Bay Area noisemaker Rubber O Cement. Local support includes an increasingly rare appearance by psychedelic shoegaze band Teepee and the eccentric Cop City/Chill Pillars.

Indian Jewelry (Reverberation Appreciation Society) headlines the second night on Saturday, December 7 at Gramps. Indian Jewelry is a noise rock collective founded by Tex Kerschen and Erika Thrasher, accompanied by Mary Sharpe on percussion and electronics, along with a fluid, rotating cast of local musicians and collaborators. Together they are flagbearers for the long Texas tradition of outsider rock â€˜nâ€™ roll â€“ a grand, precarious history spanning the 13th Floor Elevators and Red Krayola, Jandek and Butthole Surfers. As a prolific touring band, Indian Jewelry is noted for seizure inducing live shows, featuring little more than a strobe light in total darkness. â€œIndian Jewelry stand at a kind of musical crossroads,â€ according to Dazed and Confused Magazine, â€œwhere the gloriously dark moments of rock nâ€™rollâ€™s past hang side by side with clunky rave synths and a droned-out attitude.â€ Pontiak (Thrill Jockey), comprised of brothers Jennings, Van and Lain Carney who play neo-psychedelic rock with stoner rock flourishes, will provide direct support for Indian Jewelry, as well as White Mystery, a brother and sister garage rock duo from Chicago, IL, and The Wiggins from Houston, TX. Local support includes loner rock nomad Nerve City (Sacred Bones) with a full band, and purveyors of heavy psych, Lil Daggers (Beyond Beyond is Beyond).