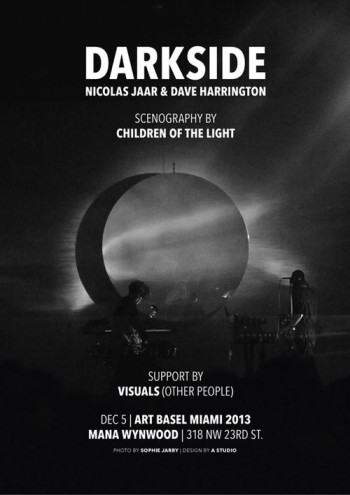 Flaunt Magazine; 3P Production, the creative team behind Bardot and III Points Festival; and Mana Wynwood, the largest multipurpose production studio and raw space in Miami?s Wynwood Arts District, will play host to a 3-night concert series during Art Basel Week that aims to bring art and music together. Art Basel at Mana Wynwood will bring some of electronic music?s most well known artists to the stage including Darkside, the collaborative duo of electronic producer Nicolas Jaar and guitarist Dave Harrington.

This one-of-a-kind concert series will be brought to life with an eye-catching mural project on the outer walls of Mana Wynwood titled Shoot for the Moon. In addition, the concert space will be transformed into an indoor garden oasis fittingly called the Sound Garden. The 3-night series will kick off with Darkside’s premiere show of their debut album, Psychic, on Thursday, December 5th.

DARKSIDE is the collaborative duo of electronic producer Nicolas Jaar and guitarist Dave Harrington. The two musicians have vastly different backgrounds, but over the course of several years of touring together they found common ground: DARKSIDE. Dave and Nico use each other as mediums, working on primal instinct and summoning a hybrid of electronic music and psychedelic rock with the kind of artistic depth and breadth for which the term ?progressive? was coined.