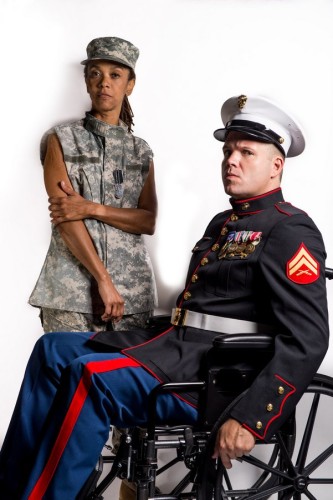 Fear Up Harsh is sponsored by Robin Ellen Meyers and presented with the support of the GLBT Community Projects Fund at The Miami Foundation.

Tickets to Fear Up Harsh are $45*, and may be purchased through the Adrienne Arsht Center box office by calling (305) 949-6722, or online at www.arshtcenter.org.

â€œI am thrilled to be opening Zoetic Stage’s fourth season at the Arsht Center with a brand new play from Christopher Demos-Brown. I had the opportunity to direct the play in an early reading and the audience was completely wrapped up in the story and its characters. FEAR UP HARSH is a sharp, intelligent play about our time in history and the people that serve this great country of ours,â€ said Meltzer.

â€œFear Up Harsh continues to carry out the central theme of our 2013-14 Theater Up Close Series with its gripping tale of myth versus tragic history, and how that dynamic changes dramatically depending on who gets to tell the story,â€ said Scott Shiller, executive vice president of the Adrienne Arsht Center. â€œIn addition, weâ€™re thrilled to continue our longtime creative partnership with Zoetic Stage. Weâ€™re certain Christopher Demos-Brownâ€™s celebrated storytelling style, coupled with his extensive research and personal interviews with veterans, will leave South Florida audiences thinking about the nature of how we view our modern heroes.â€

Fear Up Harsh examines how awards and commendations corrupt those who get them, those who give them, and those of us who worship them. In his latest drama, Demos-Brown tells the story of U.S. Marine Captain Robert Wellman, a Congressional Medal of Honor recipient who has everything heâ€™s ever wanted. His daughter is matriculating into the Air Force Academy and he owns a lucrative chain of do-it-yourself home improvement stores. However, his idyllic world is threatened when a former comrade shows up on his doorstep and challenges everything heâ€™s built his life around by revealing the truth about his past.