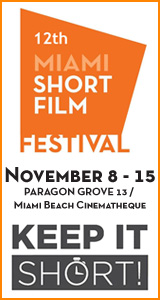 The 12th Annual MIAMI SHORT FILM FESTIVAL, November 8th through 15th, 2013 will showcase the best short films from around the globe. MsFF 2013 will be held at Paragon Grove 13 in the heart of Coconut Grove, a community long known for its love and support of the arts. To date, MsFF has presented over 800 shorts from over 40 countries and attracts top industry professionals that attend to network, serve on judging panels, and participate in seminars and outreach programs. Past MsFF award-winners have achieved significant success, including 2008â€²s GRISEN, nominated for an Oscar in 2009; FRANKIE, which won the European Film Award for Best Short, 2009â€²s DOWN IN NUMBER 5, which won a Student Academy Award in 2010, and most recently the Oscar-winning short GOD OF LOVE. The Festival brings together filmmakers, industry executives, Miami locals, and visitors who seek to discover new talent. Exhibiting filmmakers vie for multiple awards, and are welcomed like stars as they walk the red carpet at MsFFâ€™s Galas. MsFF also places special emphasis on emerging Hispanic films and filmmakers, and for the past two years has engaged in Movilfest Tenerife, and Panama, where they present a travelling version of the festival as well as sponsor Movilfest winners to screen and attend MsFF in November.