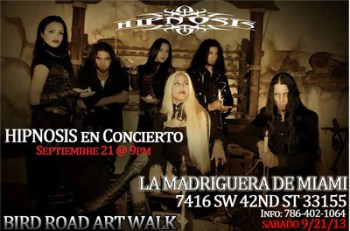 Hipnosis, recently made headlines when the band en route to a Castro-approved concert in California, declared political asylum in Miami on July 26, 2013. Now the band is ready to rock in the USA, the September 21st concert will be one of their first appearances in the United States. Curiously enough Hipnosis’ which describes their music as “Metal Cubano” have an all English repertoire of music. For more inf o please call 786.402.1064.

About the Cuban Soul Foundation (CSF)
Since 2011, La Madriguera de Miami, a project of the Cuban Soul Foundation (CSF), has provided a platform for alternative Cuban music and the visual arts by inviting contemporary Cuban artists to the United States and presenting their generations reggae beats, Hip Hop and rock music at concerts throughout American colleges and universities and most recently in the Bird Road Art District.