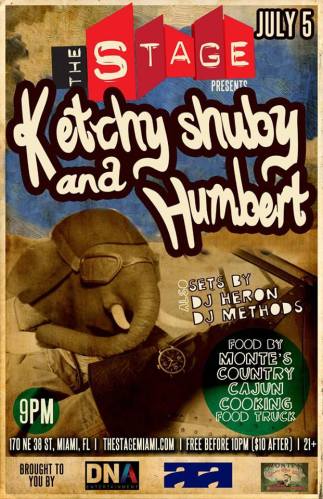 Two of South Floridaâ€™s premiere musical acts will converge at the Design District venue known for showcasing the areaâ€™s best and brightest artists. Humbert and Ketchy Shuby will co-headline the evening after Independence Day, in what promises to be a high-energy night of rock and soul.

Scene veterans Humbert will bring flavorful melodies, Beach Boy-tinged harmonies and relentless rock power to The Stage in what will be only their second performance there after Mayâ€™s Sound Theory Live relaunch on Wynwood Radio party. The four-piece is poised to release their first set of new music since 2006, which should be available online and on CD in August of this year.

â€œVery few bands are greater in weight than Humbert – Ketchy Shuby is one of them and we are very happy to be sharing the stage with them,â€ offers Humbertâ€™s colorful frontman Ferny Coipel. â€œPound for pound, they are heavier than us.â€

Ketchy Shubyâ€™s explosive funk jams coupled with the groupâ€™s soulful tunesmith and the manic-energy of lead singer /guitarist Jason Joshua Hernandez-Rodriguez have kept them extremely busy this year. Coming off spring a Midwestern tour that took them through the Austin, TX mega-music festival SXSW, the band caught the attention of Spin Magazine. Their momentum has carried them through early summer with near-weekly gigs throughout South Florida in support of their latest single â€œIâ€™ll Take Care of Youâ€.

When asked his thoughts on the pairing of the two bands, Hernandez-Rodriguez simply says: â€œHumbert is my favorite band of all time. Thatâ€™s all.â€

Also performing July 5th are DJ Heron and DJ Methods; food will be provided for a nominal fee by Monteâ€™s Country Cajun Cooking food truck. Admission to the event is free before 10 p.m., $10 afterwards. For more information and to buy tickets, visit www.thestagemiami.com. The show is open to those 21 & over.