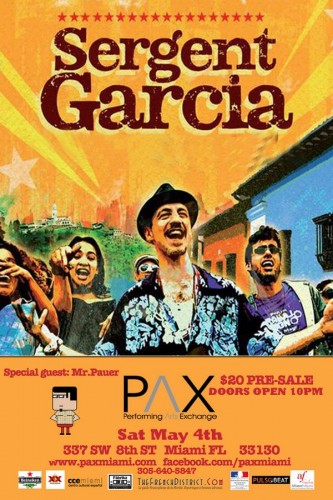 Sergent Garcia, an original figure in the Latin Alternative and European mestizo music scenes, is returning to North America with a burning live show a new album out on the Cumbancha label titled Una y Otra Vez (Time and Time Again). A pioneer in blending the fiery Caribbean sounds of salsa, reggae, ska and dancehall with a punk attitude and continental style, Sergent Garcia’s latest musical adventure finds him traveling to Colombia to dive into what is currently the epicenter of some of the world’s hottest sounds. Una y Otra Vez marks this former rocker’s return to his independent roots and renewed creative energy.

Known to many people by different names, Sergent Garcia’s music is as diverse as he is. With a diverse ancestry which includes a French mother, African cousins, and partly Hispanic roots, Sergent Garcia gains inspiration from all cultures that shows in his music.